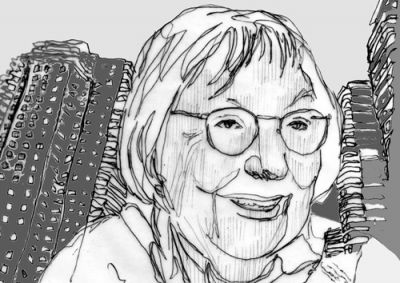 2007 launched the great Robert Moses revival in New York City. The year opened with a trifecta of exhibits at the Museum of the City of New York, the Queens Museum of Art and Columbia University, each attempting to rehabilitate the legacy
of master builder.

A revisionist history of Moses, published by Columbia University professors Kenneth T. Jackson and Hilary Ballon, burnishes the image of the legendary “power broker.” Beyond the exhibit halls, the success of a cluster of large-scale, controversial city development projects in downtown Brooklyn, the Williamsburg waterfront and West Harlem lent credence to New York Times architecture critic Robin Pogrebin’s contention that the Moses “legacy is more relevant than ever.”

As the year draws to a close Jane Jacobs, Moses’ greatest political antagonist, finally gets her chance to reply. Reply in the form of a museum exhibit, of course; the urban theorist, writer and community organizer passed away in April 2006. Given the current wave of Moses-mania, what might the woman who consistently counseled activists “not to feel helpless,” say to us today?

The Jane Jacobs and the Future of New York exhibit is appropriately small in scale. A large bank of television screens at the exhibit entrance, each featuring different scenes of city life and New York residents discussing the future of their neighborhoods, provides visitors with an appropriate level of multimedia-induced vertigo. Beyond the entrance, two gallery rooms, one devoted to Jacobs’ “four principles of healthy cities” and the second to her legendary community organizing strategies, are a powerful riposte to the current idealization of Robert Moses.

Entering the first gallery, it becomes clear that Jacobs’ urban vision remains unmatched in its focus on the importance of community and “ordinary city people.” The mantra of “mixed uses, frequent streets, varied buildings and concentration” has become familiar to every undergraduate urban studies major, and the exhibition does an excellent job of illuminating these concepts with examples from contemporary New York City. One might have hoped for more information on Jacobs’ predecessors and intellectual inspirations, but given the size of the exhibit, this omission is understandable.

The second gallery room, devoted to Jacobs’ political organizing, is perhaps even more relevant to the 21st-century city. It is also more insistently problematic and highlights the organizational and strategic dilemmas facing the next generation of Jacobs-inspired community activists.

More than 40 years later, Jacobs’ deep radicalism, both intellectual and rhetorical, comes as something of a shock. (The museum notes, without comment, that Jacobs once threatened “blood on the streets” of the West Village in response to a planned eviction.) The dramatic and oft-told story of confrontation between Jacobs and Robert Moses over the city’s plans to build the Lower Manhattan Expressway through Washington Square Park still packs a punch. Most inspiring, perhaps, is the Municipal Arts Society’s focus on present-day community organizing, as the exhibit highlights the work of neighborhood groups like Neighbors Allied for Good Growth (NAG) (in Williamsburg), Nos Quedamos (in the South Bronx) and UPROSE (United Puerto Rican Organization of Sunset Park). All of these groups, the exhibit argues convincingly, carry on Jacobs’ political legacy.

As the exhibit concludes, however, this focus on present-day neighborhood action and the Municipal Arts Society’s own calls for ordinary museum visitors to “get involved in their neighborhood” (presented in a flyer called “The City is You”) prompt the question, is Jacobs’ vision enough to confront and defeat the massive power structures threatening to turn New York City into a tourist-centric millionaires’ playground? Just down the street from the exhibit is Rockefeller Center, blanketed by throngs of Christmas visitors and the season’s first snowfall. Ironically, Jacobs cited the streets around Rockefeller Center as a perfect example of the kind of short blocks that created an urban “sense of place.” Today, however, that sense of place is reserved only for the incredibly wealthy and the hordes of Midwestern tourists who increasingly power the engine that is post-industrial New York.

Even more uncertain is the question of whether or not Jacobs-inspired organizing tactics can succeed in a world of increasingly globalized capital. Jacobs was passionate in her defense of ordinary people’s ability to fight the powers that oppressed them.

However, the number of recent failed attempts to stop large development projects (the collapse of city plans to build a New York Jets stadium on the far west side is the exception that proves the rule) casts doubt on the ability of local communities to solve large urban problems. Jane Jacobs’ urban vision continues to inspire. The strategies needed to realize that vision, however, are still up for grabs.