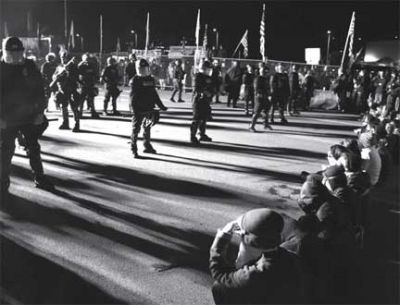 In early November, protesters in Olympia, Wash., were attacked and arrested by police as they put their bodies in the path of military convoys returning from Iraq. I was lucky to have scheduled my visit home to Olympia for early November and was able to participate in these antiwar actions.

Prior to my arrival, peace activists in our close-knit and progressive community had learned that a ship transporting combat vehicles from the 3rd Brigade Stryker Combat Team was returning from Iraq and would soon be docking at the port. Its cargo would then be hauled to nearby Fort Lewis. With only a few days to pull together a plan, OlyPMR (Olympia Port Militarization Resistance), a group previously formed to respond to this situation, sprang into action.

By the time I arrived in Olympia on Nov. 7, the military freighter had been docked at the port and had begun to unload its implements of war. Throughout the night and continuing into the morning, one convoy after another attempted to leave the Port of Olympia while dozens of protesters blocked the roadway with their bodies. In each case the convoys eventually passed, but only after police shoved demonstrators, striking many with batons and dragging others across the asphalt. At 2:30a.m., police attacked 20 nonviolent protesters with pepper spray. Two were arrested.

Inspired by the protest, one soldier walked away from his military duties that night and publicly declared his opposition to the war.

I was extremely moved by the courage and commitment of the demonstrators. Night after night, the mostly young protestors endured the cold and lack of sleep, bruises from billy clubs and burning eyes and skin from chemical weapons to stand up for what they believed in.

In one action, a daring group of six college freshmen, all new to civil disobedience, “locked down,” i.e. wired their wrists together to make it more difficult for police to move them. They encased their arms in PVC pipe, then walked as a group into the path of a moving Stryker convoy. Police arrived on the scene and without any warning, at close range, shot each of the activists with pepper-spray projectiles (“pepper rounds”). These rounds are extremely painful and cause temporary blindness. The police then used circular saws to cut through the PVC pipe.

The unforgettable night of Nov. 13 began with a mass action by the OlyPMR Women Caucus, a women’s coalition united around a plan of civil disobedience. Thirty-nine mostly college-aged women sat down on the cold pavement to block the war machines. With bright lights shining into their eyes and police looming over them in full SWAT team regalia, they chanted “No weapons on my body! We are nonviolent!” over and over again. As news cameras whirred, the police dragged them one by one across the rough pavement to a waiting police bus, this time without the use of chemical agents or billy clubs.

While all eyes were on the women being arrested, a flurry of activity broke out at a side entrance to the port. Police and their patrol cars were surrounding a small contingent of protesters, and a convoy of Strykers was making its exit at a rapid speed. I was standing close by and faced with a sudden opportunity to act. A rush of adrenaline kicked in, overriding my fear. I strode in front of the speeding tank, but it plowed forward in an attempt to drive me from the roadway. To show the driver that I meant business, I kneeled down. He slammed on the brakes, and the convoy screeched to a halt. In less than a minute an officer with a baton approached and pushed me to the side of the road.

Even so, the convoy couldn’t move forward because close to a hundred others had joined me. Only when the police attacked en masse, using pepper spray and concussion grenades, was the convoy able to depart.

Activists involved in the demonstration reported many positive gestures from the troops, such as a “thumbs up” as they drove by in their Strykers. In one memorable incident, a non-commissioned officer in desert combat fatigues got out of his car, came over to a group of us on a street corner, shook each of our hands and told us, “I just want to thank you people for what you’re doing.”

He told us that he had been deployed to Iraq twice before and found it to be a “hopeless mess.” He said that he and many other soldiers wished that they could speak out, but that military regulations prohibited them from publicly opposing the war. Forty-eight of his comrades in the Stryker Brigade had been killed in Iraq.

OlymPMR has received messages of solidarity from people from around the world, including New York City. Similar actions in other locales are currently being planned.

For more information and photographs, visit Olympia Movement for Justice and Peace: omjp.org.
From protest to resistance: Nov. 13th: 39 women faced off with police officers in riot gear to continue the effort to blockade the transport of military equipment returning from Iraq to nearby Fort Lewis. All 39 were arrested. Photo: Rob Whitlock