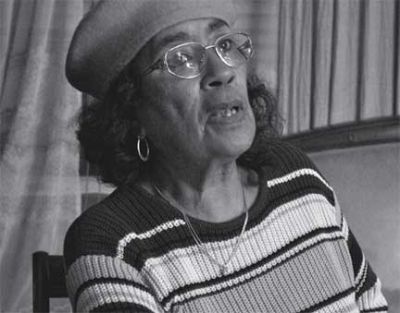 Built in the late fifties, the Delano Houses have historically been a bastion of affordable housing for the working class of Harlem. The seven buildings of the Delano houses contain 1,800 apartments, spread over the three blocks between 139th and 142nd streets and Fifth Avenue and Malcolm X Boulevard. The famed Savoy Ballroom used to be located here, the jazzera Cotton Club was just around the corner, and King Tim III — whose “Personality Jock” predated “Rapper’s Delight” as the first hip-hop record — grew up there.

Vantage Properties, in partnership with Apollo Real Estate Advisors, acquired the housing complex from Axelrod Management in March 2006 and quickly renamed it Savoy Park. It is hard to miss the flags along 139th Street emblazoned with the advertising slogan “hip and historic.” The savoyparknyc.com website flashes slides of the Apollo Theater and barbecue-joint awnings over a funky jazz-fusion soundtrack.

But Vantage has been trying to market the complex to a demographic very different from the people who have lived in Harlem for the last century. One-bedroom apartments there now rent for about $1,700; two-bedroom homes are advertised at $2,350.

According to Nellie Hester Bailey, cofounder of the Harlem Tenants Association, Vantage plans to drive out the current tenants, most of whom are elderly and live in rent-stabilized apartments. Bailey argues Vantage wants to “move to condo units, which turns into a higher income bracket, and rent to an ethnic group that is not African-American.” Once an apartment is vacated, landlords can legally slap on hefty rent increases for new renovations. Add to that the state’s weak enforcement of laws against rent-gouging, and landlords can raise rents substantially by emptying rent-stabilized apartments. If the rent on a vacant apartment reaches $2,000, it’s completely deregulated.

Vantage Properties was founded in 2005 and since then has acquired a impressive portfolio of residential and commercial properties in Manhattan and Queens. “What we’re focused on — what we think we can really do — is create a very, very high-quality product for the middle-income consumer,” Vantage CEO Neil Rubler told the New York Times last year. Last July, Apollo Real Estate partner James Simmons told the New York Daily News that the loss of affordable housing in the region “creates an intriguing investment opportunity.”

Real-estate developers are heading uptown in swarms to take advantage of the new housing market in Harlem, the southernmost neighborhood in Manhattan that is still predominantly working-class. “The land property here in Harlem has gone up drastically,” says Dolina Duzant, who was raised in Brooklyn and has lived in Delano Village since 1985.

Tenants of Delano Village have begun to organize to combat the looming gentrification. Guided by the Harlem Tenants Council, two protests have occurred. The first, on Oct. 24, was in front of the Vantage offices at Lexington Avenue and 59th Street, and drew about 35 tenants. The second, on Nov. 3 in front of the Credit Suisse offices on Madison Avenue and 24th Street, targeted Savoy Park’s financiers. The event had a smaller crowd but caused more of an effect. “Going to Credit Suisse was something that they were not happy about,” says tenant activist Valerie Orridge. Another protest at Vantage is in the works. “We plan to go back before Christmas,” says Orridge.

Tenants’ biggest complaint is that the landlords are waging a campaign of harassment against them. Many tenants were offered $10,000 or more to move out. The ones who refused have often had problems renewing their leases, which is supposed to be automatic for rent-stabilized tenants unless the landlords have a legal reason to evict them.

One common tactic that Vantage has employed is claiming that tenants’ primary residence is elsewhere, even for those who have lived in the complex for decades. Early this year, George Evans, 73, discovered that Vantage had raised his rent by $176.74 without notifying him. “Just came out of the blue,” he says. Vantage claimed that it was part of the new lease that he had signed. Evans, who had not signed a new lease — no verbal notification, no new lease,” he says — took the matter to Housing Court. The court ruled in his favor, so Vantage decided that they would not renew his lease, and stated that his primary residence was in Orlando, Florida. Evans had cosigned the mortgage for his cousin on a house in Orlando, but had never lived in it; he has occupied his apartment in Delano Village since 2004. That case is now in court.

“You have people who have been living here for years, and getting notices that say that ‘we are not going to renew your lease because we don’t believe that you are the primary tenant of this apartment,’” explains Duzant, “These people are fifty, sixty, seventy years old and are living on fixed incomes.”

“I cannot go back to work, I live on a fixed income,” says Lewis Hall, a resident since 1969, who has also been accused of having a primary residence elsewhere.

Another common complaint is the buildings’ state of disrepair. “They put in a second-hand carpet in the hallways,” says Bailey. “We think that is what caused the bug problem.” Vantage’s office refused to respond to inquiries by The Indypendent for comment.

Under the previous landlords, tenants say, repairs would occur quickly. Now repairs are simply left undone. “[The former landlords] were excellent. Before anything was wrong, they would fix it before you hung up the phone,” Evans explains. “These people never show up, they never call you back.”

Security is another problem. James Marshal, 43, who was born and raised in Delano Village, was in his apartment when he got a visit from an agent from Phat Cribs International Realty, who wanted to show his apartment to a young couple. “On May 20, around 3:30, my doorbell rang, and by the time I answered it, someone had put in a key and was opening the door,” Marshal says. He found out that “the management gave [the agent] the key.” The agent told Marshal that he had made a mistake, and wanted to enter the apartment that was adjacent to his, which is vacant. “If he knew the apartment was vacant, why did he ring the doorbell?” Marshal asks. Marshal phoned his management about the real-estate agent, who explained that it was simply a mistake.

“Less than three weeks later, someone else entered a key [in my door],” says Marshal. He opened the door and found a Latina woman who said she had been sent by the management to clean his apartment. He phoned the management again, and they explained that the woman did not speak English well and had gotten the apartment number wrong. Marshal then sent a letter to the Vantage office complaining that they had no right to hand out keys to his apartment to whomever they want.

He has yet to receive a reply. “This is not a hotel, it is where I live,” he says. “It was an unlawful entry.”

“What is winning here?” asks Duzant. “Having the tenants not allow Vantage to come in and do whatever they want to do. We want to see proof, we want to know what’s going on, we want to see everything.”

Steve Wishnia contributed to this article.