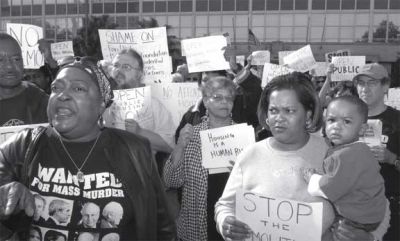 The city Housing Authority approved demolition of the four projects — the St. Bernard, C.J. Peete, B.W. Cooper and Lafitte developments — in late November. The authority, along with the federal Department of Housing and Urban Development, plans to replace their 4,600 apartments with mixed-income housing.

Residents and community organizers have formed the Coalition to Stop Demolition and are hoping to mobilize support from around the country for a last-ditch campaign of civil disobedience, after watching a class-action lawsuit fail in the courts and legislation stall in the U.S. Senate.

“We are calling on our national allies to join with the residents of New Orleans and all those who believe in the human right to housing to resist demolition,” said Kali Akuno of the People’s Hurricane Relief Fund.

“The goal [of the coalition] is to get public housing back open and to give people the opportunity to come home,” added Sharon Sears Jasper, a former resident of St. Bernard. “By any means necessary — whatever it takes to stop the demolition and get the residents home.”

Since public-housing residents evacuated the city or were forcibly removed from the developments during Hurricane Katrina their former homes have been kept fenced off and vacant, despite the fact that these New Deal-era brick buildings suffered little or no wind or water damage from the storm.

Meanwhile, the Federal Emergency Management Administration has announced plans to evict the thousands of families living in its trailers by the end of May. “It’s the individual’s responsibility to go out and find what’s suitable for them,” a FEMA spokesperson told the New York Times. And the homeless population in New Orleans and nearby Jefferson Parish has reached around 12,000, almost twice what it was before the flood, with some living under highway overpasses and others camped outside City Hall in an informal tent city.

Private development corporations, working off 99-year leases from HUD, have developed plans for mixed-income housing that are consistent with previously announced blueprints for a “new” New Orleans that would be smaller and whiter. The demolition and reconstruction of these four public- housing projects would cost more than $700 million and reduce the number of lowincome units by 82 percent.

Residents and organizers in New Orleans also point to high-level conflicts of interest in the rebuilding contracting process, noting HUD Secretary Alphonso Jackson’s ties to Columbia Residential LLC, an Atlantabased company that is a part of a team that recently received a $127 million contract to rebuild the St. Bernard project. Jackson formerly worked as a consultant for Columbia Residential and still owns a stake in it valued at between $250,000 and $500,000.

“With the corruption now with Alphonso Jackson, an investigation into him would help, I think, to open the housing again,” Jasper said.

Housing activists are also exasperated with Louisiana’s Republican Senator David Vitter, who has worked to thwart the Gulf Coast Recovery Act of 2007, which passed the House earlier this year with broad bipartisan support. The bill, cosponsored in the Senate by Louisiana’s Mary Landrieu and Christopher Dodd of Connecticut, would provide assistance to displaced homeowners and authorize the repair and rehabilitation of existing public housing.

“The Senate bill … [is] just sitting there now, because of David Vitter — he doesn’t want to reopen public housing,” Jasper said.

STOP THE BULLDOZERS: The Coalition to Stop Demolition hopes to mobilize support from around the country to save low-income housing in New Orleans after watching a class-action lawsuit fail in the courts and legislation stall in the U.S. Senate. PHOTO Courtesy Mavis Yorks