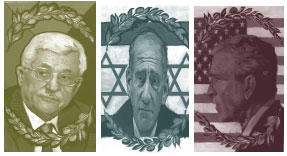 One may well think that the struggle inside the Jewish community of Israel is between those of the political right, who want to maintain the settlements in East Jerusalem and the West Bank so as to “redeem” the Greater Land of Israel as a Jewish country, and those of the left who seek a two-state solution with the Palestinians and are thus willing to relinquish enough of the “territories”, if not at all, in order that a viable Palestinian state may emerge.

This is not really the case. Polls and the make-up of the Israeli government suggest that perhaps a quarter of Israeli Jews fall into the first group, the die-hards, while not more than 10 per cent support a full withdrawal from the occupied territories. (Virtually no Israeli Jews use the term “occupation”).

The vast majority of Israeli Jews, stretching from the liberal Meretz party through Labour, Kadima and into the “liberal” wing of the Likud, excepting only the religious parties and the extreme right-wing led by former Prime Minister Benjamin Netanyahu and the current minister of strategic affairs, Avigdor Lieberman, share a broad consensus: both for security reasons and because of Israel’s “facts on the ground,” the Arabs (as we Israelis call the Palestinians) will have to settle for a truncated mini-state on no more than 15 to 20 percent of the country between the Mediterranean and the Jordan River.

What’s more, it’s agreed that the decision whether to relinquish any territory and how much is an exclusively Israeli decision. Our power, our all-encompassing concern for security and the plain fact that the Palestinians just don’t count (except as a nuisance factor) limit any peace process to, at best, a willingness to grant them a tiny Bantustan on four or five cantons, all encircled by Israeli settlements and the military.

This is, of course, completely unacceptable to the Palestinians which raises a fundamental problem. In any genuine negotiations leading to just, sustainable and mutually agreed-upon accord, Israel would have to give up much more than it is willing to. For Israel, negotiations must take place once in a while, if only to project an image of it as a country seeking peace — Annapolis being merely the latest charade — but they can never lead to any real breakthrough because two-thirds of the Jewish public supports a permanent Israeli presence in the occupied territories, civilian and military, that forecloses a viable Palestinian state.

How, then, does Israel retain its major settlements, a “greater” Jerusalem and control over territory and borders without appearing intransigent? How can it maintain its image as the only seeker of peace and the victim of Arab terrorism, effectively concealing its own violence and, indeed, the very fact of occupation in order to shift the blame to the Palestinians?

The answer for the past 40 years of occupation is the status quo, delay, while quietly expanding the settlements and strengthening its grip on the West Bank and Gaza.

The end result, toward which Israel has been progressing deliberately and systematically since 1967, can only be called apartheid, which means “separation” in Afrikaner, precisely the term Israel uses to describe its policy (hafrada in Hebrew). And it is apartheid in the strict sense of the term: one population separating itself from the rest, then dominating permanently and institutionally through a political regime like an expanded Israel locking the Palestinians into dependent and impoverished cantons.

The overriding question for the Israeli government, then, is not how to reach peace. If peace and security were truly the issue, Israel could have had that 20 years ago if it had conceded the 22 percent of the country required for a viable Palestinian state. Today, when Israel’s control is infinitely stronger, why, asks the Israeli Jewish public and the government it elects, should we concede anything significant?

We enjoy peace with Egypt and Jordan, and Syria is dying to negotiate. We have relations with most Arab and Muslim states. We enjoy the absolute and uncritical support of the world’s only superpower, supported by a compliant Europe. Terrorism is under control, the conflict has been made manageable, Israel’s economy is booming. What, ask Israelis, is wrong with this picture?

No, the issue for Israel is rather how to transform its occupation from what the world considers a temporary situation to a permanent political fact accepted by the international community, de facto if need be or, if apartheid can be finessed in the form of a two-state solution, then formally.

And here’s the dilemma and the source of debate within the Israeli government: Does Israel continue with the strategy that has served it so well these past 40 years, delaying or prolonging negotiations so as to maintain the status quo, all the while strengthening its hold over the Palestinian territories? Or, at this unique but fleeting moment in history when George Bush is still in office, does it try to nail it all down, forcing upon the Palestinians a “transitional state” that requires final issues be decided through negotiations?

Olmert, following Sharon, is pushing for the latter. Netanyahu, Lieberman, the right-wing (including many in Olmert’s own party) and, significantly, Labour Party Chairman and Defense Minister Ehud Barak, always a military hawk, are resisting out of fear that even a process of pretend negotiations might get out of hand, creating expectations of Israel. Better, they say, to stay with the tried-and-true policy of status quo which can, if cleverly managed, extend indefinitely.

Besides, Bush is a lame duck, and no pressure will be put on Israel until June 2009, at least six months after the next U.S. president is inaugurated, Democrat or Republican. We’re just fine until then; why rock the boat? The only tricky time for Israel is the two years in the middle of a presidential term. We can weather that. Annapolis? We’ll try cautiously for apartheid, hoping that Abu Mazen [Mahmoud Abbas], prodded by Quartet envoy Tony Blair, will play the role of collaborator. If that doesn’t work, well, status quo is always a reliable default.

In the meantime, as long as the Israeli public enjoys peace and quiet and a good economy, and as long as it remains convinced that security requires Israel to retain control of the territories, no pressure will come from the home front for any meaningful change of policy.

Given this political landscape in Israel, in the territories and abroad, it’s hard for Israeli leaders to conceal their ebullient feeling that, whether formally or not, “we’ve won.”

Jeff Halper is the coordinator of the Israeli Committee Against House Demolitions (ICAHD). jeff@icahd.org. A longer version of this article originally appeared online at tikkun.org.