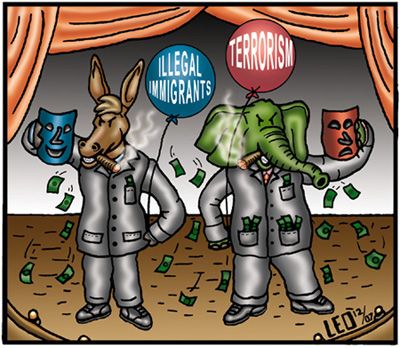 The presidential race is about many things: money, branding, celebrity, the media and theatrics. The one thing it’s not about is politics.

Going into 2008, there are six major issues confronting the United States: the Iraq War and the “war on terror,” global warming, health care, immigration, the deteriorating economy, and the expanding police state. Not one of them will be substantively addressed during the next year.

There will be a lot of screeching about immigration and terrorism when the general election gets under way and the Republicans play the fear and terror cards, but no intelligent discussion.

Don’t look to the mainstream media for this. They will obsessively deconstruct the semiotics of hairdos and outfits, facial expressions and body language, but will skimp on discussing real policies that might address these pressing issues.

It’s a theater of the absurd. Even as political issues increasingly become a question of life and death, the national stage-managed debate shrinks from them equally fast.

Look at the presidential campaign, which has turned into a two-year death march from its start after the November 2006 elections. First was speculation over who would run. Then the contest was to secure high-profile consultants, pollsters, campaign managers, spokespeople and bloggers, followed by jockeying for celebrity endorsements — Oprah for Obama, Chuck Norris for Mike Huckabee, the Osmonds for Mitt Romney, Bonnie Raitt for John Edwards and about half of Hollywood for Hillary Clinton.

The most ludicrous stage, a media creation, is the “money primary”: the race to connect with wealthy donors to generate the heftiest quarterly fundraising totals. In this second Gilded Age of America, a candidate must have the golden seal of the moneyed elite to be considered “serious.”

Thus, before voters cast a single ballot in any primary, the presidential field has been winnowed to those who could pass these hurdles. The serious Democratic candidates, as the mainstream media defines it, are Clinton, Edwards and Barack Obama.

There is a dime’s worth of difference between them. None promises a full withdrawal from Iraq by 2013. None endorses single-payer health care, the only real solution. All three favor unproven and corruption-prone “capand- trade” mechanisms to combat global warming, rather than strictly regulating pollutants at the source. All are largely quiet on immigration, trying to pander simultaneously to corporate need for cheap labor, a populist storm of jingoism and the power of the Hispanic vote.

On the Republican side, the field is more open, but all the candidates are lunatics. Almost without exception they compete to show who hates immigrants the most, who will ban abortion the fastest, who will bomb Iran the fiercest, who will waterboard the most terrorists and who will stay the course in Iraq the longest.

For candidates on both sides, political vision is about branding. Obama is brand hope; Clinton is brand leadership; Rudy Giuliani is brand 9/11; Huckabee is brand Christian Right; and Romney is brand whatever-red-meat- conservat ives -are feeding-on at the moment.

Political tactics are for damaging the brand identity. Clinton’s opponents seized her wavering response over supporting driver’s licenses for illegal immigrants to remind voters she has no beliefs other than what the latest polls or her biggest donors tell her. Not that the other Democrats, except perhaps Dennis Kucinich, have a coherent plan beyond buzzwords like “enforcement,” “secure borders,” “guest workers” and “path to citizenship.”

Edwards has turned the head of many a progressive because he actually talks policy, but he’s playing a well-known role. Lacking the party machine backing Clinton and the media hagiography illuminating Obama, Edwards packages himself as an issues man, which is what Jerry Brown did in the 1992 race and Howard Dean in 2004. Talking politics means talking about how corporations and the upper class — the ones who fund presidential campaigns — plunder the government. This means that issues candidates can become contenders but never winners, because they lack money to buy huge blocks of television advertising.

So most candidates choose to avoid politics and concentrate on branding to create a product that fulfills the emotional needs of a public that looks to shopping as the cure-all for any ill. (Hollywood and an educational mythology that reduces history to the deeds of great individuals also give support to political branding.)

The corporate media reinforce these tendencies. The rise of television has meant the triumph of advertising in presidential campaigns, as first detailed by Joe McGinniss in The Selling of the President, which analyzed the marketing of Richard Nixon in his 1968 campaign.

The television networks, which still dominate the process, value glib sound bites over in-depth issues coverage. Analysis, for the most part, is of messaging, stage management and organizational discipline, which then become the issues.

By constantly running away from real issues, the candidates are unable to build mass support for policies that could actually make a huge difference to average Americans, but which threaten vested interests.

For instance, the looming issue of 2008 is a potential recession. It’s a byproduct of the subprime mortgage crisis that brokerage houses profited from handsomely, but which is now dragging them down and resulting in a record number of home foreclosures. The Federal Reserve Bank’s solution is to bail out Wall Street by sacrificing Main Street, lowering interest rates, which is cheapening the dollar, thereby sending oil prices skyhigh and fueling inflation.

Since the late seventies, Fed policy and most domestic legislation has been designed to keep the owning class happy. The only substantial legislation is that which increases upper-crust wealth or government power. Dependent upon corporate rulers, no national politician or media outlet will admit the government is a plutocracy.

Without this admission, there can be no open political debate. Without open debate that can spur mass movements, there will be no meaningful health-care solution because the insurance industry will block it, as it did in the first Clinton administration. There will be no action on global warming, because the coal, oil and auto industries will stymie it. The only immigration “reform” will combine punitive measures with ensuring cheap, compliant guest workers. The police state will continue to accrue power, though probably more slowly under a Democrat than a Republican.

There is an important lesson for progressive movements. Despite the fading of the antiwar movement, the 2006 election turned on the Iraq War. Without a movement to hold their feet to the fire, however, the Democrats have continued to fund it. In 2004, much of the left muted their criticisms of the Democrats in favor of the “Anybody But Bush” movement.

We can see how far that got us. Unless there is constant pressure on the Democrats and candidates are forced to discuss real issues, they will have neither the political capital nor the impetus to do more than manage the foundering ship of state.