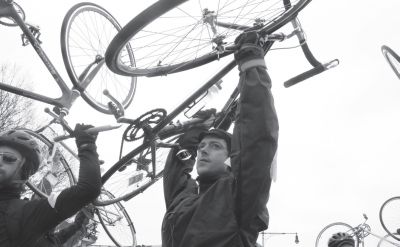 When Kevin Kaplicki stumbled upon the crash scene of Liz Padilla, a 29- year-old lawyer, who was killed while biking on Fifth Avenue in Brooklyn Park Slope, he decided that something needed to be done to acknowledge New York City cyclist fatalities.

Inspired by a street memorial project called Ghost Bike that began in St. Louis in 2003, Kaplicki and the art collective Visual Resistance decided to install a bike memorial for Liz Padilla and two others on Houston St. in Manhattan. The memorials are junk bikes painted a ghostly white, adorned with flowers and a plaque with cyclist’s name, age and date of death, and are chained permanently at the accident scene.

Originally, Ghost Bike installations were anonymous. Now, the project has expanded under the umbrella of the NY C Street Memorial Project and includes 41 Ghost Bikes, memorial rides and a support group for the family and friends of those killed. There are now 30 Ghost Bike projects across the world.

“Putting up a Ghost Bike shows that this person existed, that life was lost, and that’s something not to forget,” said Leah Todd, an NY C Street Memorial Project member.

Every year, a memorial ride is held the first Sunday of the new year in New York to pay tribute to the cyclists and pedestrians who were killed in the past year. On Jan. 6, 250 people rode to honor the more than 20 cyclists and 150 pedestrians who were killed in 2007. These numbers are a rough estimate based on press reports, as the NY PD only releases this data on a yearly basis. As of the first week of January, the NY PD still has not released the 2007 pedestrian or cycling fatalities statistics.

Ryan Knuckel, a co-founder of the Ghost Bike project, says that while the people the memorial rides honor are as diverse as New York City itself, one thing that they all have in common is that their deaths are commonly viewed as accidents, as opposed to crimes for which the driver should be held accountable.

Audrey Anderson’s 13-year-old son, Andre, was killed while biking in Far Rockaway, Queens, in 2005. She says that although her son was struck from behind by a man who witnesses say was driving recklessly, NY PD neglected to give the driver a breathalyzer test and did not launch an investigation into Andre’s death. Anderson believes when vehicles are the weapons, the killers are rarely prosecuted.

“In New York you are allowed to kill on the streets and just walk away from it. It’s wrong,” said Anderson.

Karen Rancher’s son Elijah was killed in St. Albans, Queens, shortly after his 12th birthday. She returned from her military deployment in South Korea to attend the memorial ride. “We’re in an age of technological advancements, but we don’t respect humanity. We have countries like South Korea, China, France where you have cyclists and they take into consideration giving them the right of way … we don’t take that consideration as we drive, so we have the irreplaceable loss of life,” says Rancher.

Caroline Samponaro, Bicycle Campaign coordinator with Transportation Alternatives, believes further infrastructure improvements are necessary. “If we’re really going to see change in our transportation system … [W]e’re going to need a system that favors pedestrians, cyclists and mass transit and stops putting all of its attention and resources towards the car-driving minority.”

Another story on bicycle activism:
Iranian Couple Cycles the World for Peace and Conservation