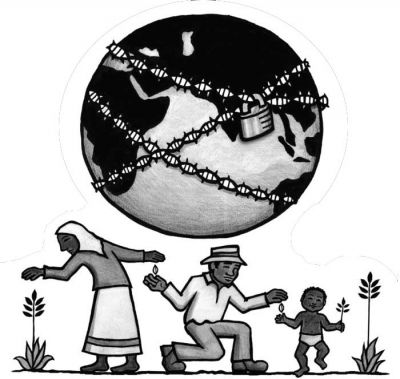 With all the fanfare that usually accompanies such gatherings, delegates to the December United Nations climate talks on the Indonesian island of Bali returned to their home countries declaring victory. Despite the continued obstructionism of the U.S. delegation, the negotiators reached a mild consensus for continued negotiations on reducing emissions of greenhouse gases, and at the very last moment were able to cajole and pressure the United States to sign on. But in the end, the so-called “Bali roadmap” added little beside a vague timetable to the plans for renewed global climate talks that came out of a similar meeting two years ago in Montreal. With support from Canada, Japan and Russia, and the acquiescence of former ally Australia, the U.S. delegation deleted all references (except in a non-binding footnote) to the overwhelming consensus that reductions of 25 to 40 percent in annual greenhouse gas emissions are necessary by 2020 to forestall catastrophic and irreversible alterations in the earth’s climate.

In Kyoto in 1997, then-Vice President Al Gore was credited with breaking the first such deadlock in climate negotiations. He promised the assembled delegates that the United States would support mandatory emissions reductions if their implementation were based on a scheme of marketbased trading of emissions. The concept of “marketable rights to pollute” had been in wide circulation in the United States for nearly a decade, but the Kyoto Protocol was the first time a so-called “cap-and-trade” scheme was to be implemented on a global scale. The result, a decade later, is the development of what British columnist George Monbiot has aptly termed “an exuberant market in fake emissions cuts.”

For a full decade now, most conversations about reducing climate-damaging carbon dioxide emissions have focused on one extremely narrow question: How can we place a sufficient monetary value on carbon dioxide and other greenhouse gases so that the so-called “free market” can eventually induce corporations to reduce their emissions?

This ideological focus on the market has become perhaps the single greatest obstacle to meaningful progress against the disruption of the climate. The world capitalist market, a rather artificial invention from its origins in the late 18th century, is very good at concentrating wealth and exacerbating global inequalities, but has never been anything but an obstacle to social or environmental equity. Today, ideas like market-traded carbon dioxide credits, and purchases of “offsets” (so people in rich countries can continue polluting, while nominally paying for emissions reductions elsewhere) have become the main excuses for postponing real changes in our economy and technologies.

Over the past year, activists across the United States and in other industrial countries have begun to dramatize the reality of potentially catastrophic global warming and pressure their governments to do something about it. Al Gore’s movie has had a mostly positive educational impact, as has the 2007 report from the Intergovernmental Panel on Climate Change, documenting the “unequivocal” evidence that global warming is real and that we can already see the consequences. But most public events up to now, at least in the United States, have been rather timid in their outlook, and minimal in their expectations for real changes. Today we need a far more pointed and militant approach, a genuine People’s Agenda for Climate Justice. Such an agenda would have at least four central elements:

1. Highlighting the social justice implications of global climate disruptions. Global warming is not just a scientific issue, and it’s certainly not mainly about polar bears. As last year’s U.N. Human Development Report described so eloquently, global warming is a global justice issue, and people in the global South are already facing severe consequences from increased droughts, wildfires and major floods. Bringing home these implications can go a long way toward humanizing the problem and raise the urgency of global action.

2. Dramatizing the links between U.S. climate and energy policies and U.S. military adventures, particularly the war in Iraq, which is, without question, the most grotesquely energy-wasting activity on the planet today. Author Michael Klare has documented that troops in the Persian Gulf region consume 3.5 million gallons of oil a day, and that worldwide consumption by the U.S. military — about four times as much —are equal to the total national consumption of Switzerland or Sweden. This past October, people gathered under the banner of “No War, No Warming” blocked the entrances to a congressional office building in Washington, demanding an end to the war and real steps to prevent more catastrophic climate changes. Similar actions across the country could go a long way toward raising the pressure on politicians who consistently say the right thing and blithely vote the opposite way.

3. Exposing the numerous false solutions to global warming promoted by the world’s elites. Billions of dollars in public and private funds are wasted on such schemes as a revival of nuclear power, mythical “clean coal” technologies (supported by Barack Obama, among others), and the massive expansion of so-called biofuels (more appropriately termed agrofuels): liquid fuels obtained from food crops, grasses, and trees. Carbon trading and offsets are described as the only politically expedient way to reduce emissions, but they are structurally incapable of doing so. We need mandated emission reductions, a tax on carbon dioxide pollution, requirements to re-orient utility and transportation policies, public funds for solar and wind energy, and large reductions in consumption throughout the industrialized world. Buying more “green” products won’t do; we need to consume less!

4. Envisioning a new, lower-consumption world of decentralized, clean energy and politically empowered communities. Like the anti-nuclear activists of 30 years ago, who halted the first wave of nuclear power in the United States, while articulating an inspiring vision of directly democratic, solar-powered communities, we again need to dramatize the positive, even utopian, possibilities for a post-petroleum, post-mega-mall world. The technologies already exist for a locally controlled, solar-based alternative, at the same time that dissatisfaction with today’s highconsumption, high-debt “American way of life” appears to be at an all-time high. Small experiments in living more locally, are improving the quality of life and thriving everywhere. So are experiments in community-controlled renewable energy production.

The reality of global warming is too urgent, and the outlook far too bleak, to settle for status-quo false solutions that only appear to address the problem. Real solutions to global warming, as Van Jones of San Francisco’s Ella Baker Center has pointed out, are also far more likely to benefit our inner cities and put millions of people to work installing decentralized, energy-saving technologies.

Al Gore is correct when he says that political will is the main obstacle to addressing global warming, but we also need to be able to look beyond the status-quo and struggle for a different kind of world.