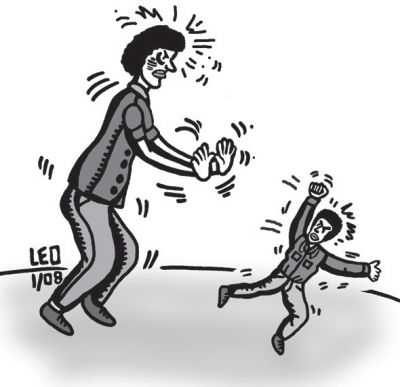 Safiya Allette, an undocumented Trinidadian immigrant, endured five years of escalating abuse from her husband as she waited for him to file paperwork that would allow her to become a U.S. citizen. He never did.

“One time he was choking me so hard I couldn’t breath,” said Allette. “So, I played dead. When he came off of me I just laid there in shock.”

Allete is one of an increasing number of abused immigrants who are filing their own petition for citizenship as battered spouses of U.S. citizens, a right granted to them by the Domestic Violence Against Women Act.

Unlike recent punitive legislation, this rare example of immigration reform continues to provide protection for desperately isolated members of society.

“I don’t ever want to go back there,” said the petite 26-year-old mother of three. “Mentally, it broke me down. I had no communication with my family.”

On Sept. 17, Allette became a legal permanent resident. She can apply for citizenship in five years.

Her journey from living in the United States on an expired travel visa to becoming a green card holder began in late 2005, at the Bronx office of the New York Legal Aid Society, after she shared her story with a staff immigration attorney.

“She said Safiya, ‘I think you have a case.’ And we started filing,” Allette said.

In order to file an I-360 petition, she had to prove she had been in a good faith marriage to Jerome Earl, Jr., a U.S. citizen from Brooklyn. She gathered her marriage certificate, statements from their joint bank account and birth certificates for their two sons.

Her twin sister wrote a statement describing the verbal, emotional and physical abuse she witnessed while living with the couple before she returned to Trinidad.

“This so-called man … calls her names like stupid, bitch and whore,” the statement reads.

Allette said she left her husband several times over the course of their marriage. One time she moved into a shelter and stayed away for several months, but kept in touch over the phone.

“I would block the number and I would call him,” Allete said. “Finally, one time he said — and this is what got me — he was like ‘Okay, I’m going to file your immigration papers for you.’ I was like, okay, he’s going to do it.”

She returned home and Earl filed part of her paperwork, but she said he never finished it because he wanted her family to pay the necessary fees. His incomplete I-130 petition is one of the documents Allette used in her self-petition for citizenship.

“I think it would be very difficult for someone who is in a fragile emotional state to go through this on her own,” Austrie said. “Because we know the law, we know what CIS [Citizenship and Immigration Services] is looking for. And you’re sort of fleshing it out for someone on the other side of the table to relive what the client went through.”

The Violence Against Women Act became law in 1994. Congress unanimously reauthorized it in 2005, but funding must be appropriated each year.

The Legal Aid Society’s assistance for clients like Allette is funded by private and public grants, including a grant derived from the New York City Department of Youth and Community Development. The only fee Allette paid was $70 to get her fingerprints.

On July 30, petition fees for most immigrants increased from $190 to $375. But for battered women filing self-petitions the fee is now waived.

Austrie said this could further ease the application process for her clients who are immigrants from Mexico, the Dominican Republic, Honduras and the Caribbean and who often live in shelters.

Now that Allette is a legal resident of this country, she said she is focused on finding a job to support her children and save money to pursue a nursing degree.

The New York Legal Aid Society’s Bronx office recently used grant funding to hire a second attorney to help more battered women come to the end point where Allette is now. “It was a door that opened for her,” Austrie said. “She’s young and she’s able to start fresh and learn from her past.”