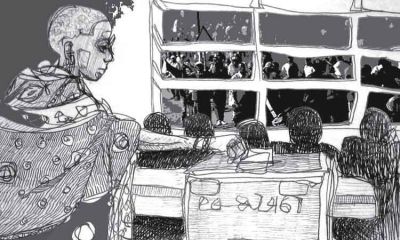 NAIROBI, Kenya—On Dec. 27, I stood in a line for six hours — from 5:30 a.m. to 11:30 a.m. — waiting for my turn to cast a vote in my country’s presidential, parliamentary and civic elections. When the votes were counted later that night, Raila Odinga, the opposition leader, began taking a near-unassailable lead. At one point, he led with almost one million votes. But somehow, Mwai Kibaki the incumbent president squeezed through to win a disputed victory. I can live with that. What I can’t live with, is that hundreds of Kenyans have lost their lives because of these disputed election results.

When the tension escalated, I had to move to my brother’s house because I stay in a neighborhood dominated by the Kikuyu, the biggest tribe in Kenya and also one that President Mwai Kibaki comes from. Tragically, Kikuyus around the country are bearing the brunt of an angry people and they are also beginning to retaliate.

After two days of a house arrest of sorts, it was extremely important that I leave the house. But when I tried to do so, I could not pass a human roadblock of more than 50 people who were sitting by the roadside in a tense and excited mood. But I had to proceed because I needed to call my friend in the town of Eldoret. She is from the Kikuyu community while most of her neighbors are from the Kalenjin community. Due to no fault of hers, the president happens to be from her community. Due to his own fault, the president has greatly angered the Kalenjin community together with 38 other tribal communities. Even the supposedly official results show that he only led in two provinces out of eight. Consequently, members of all other communities generally feel that the president has robbed them.

I blame the people who commissioned and condoned the rigging of these elections. While I realize that most losers usually blame rigging for their losses, these particular rigging claims are not mere speculation. Samuel Kivuitu, the chairman of the Electoral Commission of Kenya has already admitted that he announced the presidential results under pressure from the President Kibaki’s Party of National Unity. He also conceded that there were widespread irregularities, which resulted in extended delays in announcing results. Both local and international observers have explicitly reported that while the actual voting process was clean, the tallying of the votes was riddled with faults. Raila Odinga has refused to accept these results. Millions of Kenyans have refused to accept these results. Commerce has been paralyzed across the country and it is not business as usual. Lives have been lost and we cannot go on like this.

Kenya is now in a state of panic. On Jan. 1, when the rest of the world was celebrating the New Year, 30 women and children were burnt alive in a church where they had sought refuge. They died because someone found it fit to rig an electoral process and someone else found it fit to either facilitate or condone that rigging. They have died because no one at a high level was prepared to quell a fire that consumed highways, byways and villages of this great nation. They have died because mass intolerance has been borne from a huge political deception.

I hold all the aforementioned persons responsible for these deaths and any other deaths that may result from this tragic situation. The blood of these fellow Kenyans is primarily on the hands of the politicians who trampled on the fundamental voting rights of our people. This innocent blood is also on the guilty hands of those whose acts of violence inflicted irreversible death blows. No injustice, however heinous, warrants murder of the innocents. As we learnt from the Rwanda genocide, this blood will also be on the hands of all those who will turn a blind eye on this simmering conflict. This is why we cannot, and must not turn a blind eye on this violence and other violent situations around the world.

Timeline of an Electoral Disaster

While the Western media has focused on scenes of shocking inter-tribal violence in Kenya and the possibility of a “second Rwanda,” the turmoil can more accurately be ascribed to smoldering resentments about a rigged political system.
Dec. 27
Millions stand in long lines to vote in Kenya’s second-ever multi-party elections. Pre-election polls show former political prisoner and opposition leader Raila Odinga to be leading.

Dec. 27
Preliminary election results show Odinga leading by over a million votes, a seemingly insurmountable advantage.
Dec. 27–30
The vote count is delayed for three days by the national election commission. International election observers are barred from watching the vote count in the central tally room in the capital of Nairobi.

Dec. 30
Kibaki is sworn in for a second term hours after his election victory is announced. Protests and riots erupt across the country.

Dec. 30–Jan. 4
Hundreds of people are killed and a quarter million are displaced by inter-ethnic violence. Many victims are members of Kibaki’s Kikuyu community. The Kikuyu’s are the largest of Kenya’s 42 tribal communities and have dominated Kenya’s political and economic life since the country gained independence from the British in 1963.

Jan. 3
The head of Kenya’s electoral commission, tells reporters that votes had been tampered with to give the President an advantage and that he did “not know whether Kibaki won the election.”

Jan. 3
Police beat and tear gas protesters trying to gather in Nairobi for a scheduled “millionman” rally against President Kibaki.

Jan. 7
Under pressure from the U.S., Odinga calls off planned protests and agrees to meet with Kibaki in talks mediated by the African Union. The U.S. supplies roughly $1 billion per year in aid to Kenya, which allows American forces to operate from Kenyan bases and conducts joint exercises with U.S. troops in the region.