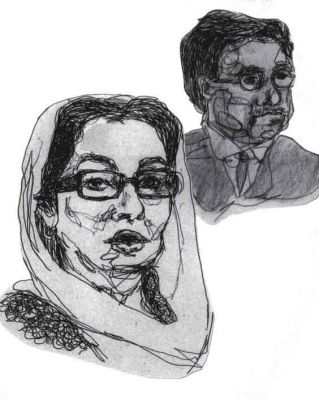 Six hours before she was executed, Mary, Queen of Scots wrote to her brother-in-law, Henry III of France:“…As for my son, I commend him to you in so far as he deserves, for I cannot answer for him.” The year was 1587.

On Dec. 30, 2007, a conclave of feudal potentates gathered in the home of the slain Benazir Bhutto to hear her last will and testament being read out and its contents subsequently announced to the world media. Where Mary was tentative, her modern-day equivalent left no room for doubt. She could certainly answer for her son.

A triumvirate consisting of her husband, Asif Zardari (one of the most venal and discredited politicians in the country and still facing corruption charges in three European courts) and two ciphers will run the party till Benazir’s 19-year-old son, Bilawal, comes of age. He will then become chairperson-for-life and, no doubt, pass the title on to his children. The fact that this is now official does not make it any less grotesque. The Pakistan People’s Party (PPP) is being treated as a family heirloom, a property to be disposed of at the will of its leader. Nothing more, nothing less. Poor Pakistan. Poor People’s Party supporters. Both deserve better than this disgusting, medieval charade.

Benazir’s last decision was in the same autocratic mode as its predecessors, an approach that would cost her — tragically her own life. Had she heeded the advice of some party leaders and not agreed to the Washington-brokered deal with Pervez Musharraf or, even later, decided to boycott his parliamentary election she might still have been alive. Her last gift to the country does not augur well for its future.

How can Western-backed politicians be
taken seriously if they treat their party as a fiefdom and their supporters as serfs, while their courtiers abroad mouth sycophantic niceties concerning the young prince and his future.

All this could be transformed if inner-party democracy was implemented. There is a tiny layer of incorruptible and principled politicians inside the party, but they have been sidelined. Dynastic politics is a sign of weakness, not strength. Benazir was fond of comparing her family to the Kennedys, but chose to ignore that the Democratic Party, despite an addiction to big money, was not the instrument of any one family.

The issue of democracy is enormously important in a country that has been governed by the military for over half of its life. Pakistan is not a “failed state” in the sense of the Congo or Rwanda. It is a dysfunctional state and has been in this situation for almost four decades.

At the heart of this dysfunctionality is the domination by the army and each period of military rule has made things worse. It is this that has prevented political stability and the emergence of stable institutions. Here the United States bears direct responsibility, since it has always regarded the military as the only institution it can do business with and, unfortunately, still does so. This is the rock that has focused choppy waters into a headlong torrent.

The military’s weaknesses are well known and have been amply documented. But the politicians are not in a position to cast stones. After all, Musharraf did not pioneer the assault on the judiciary so conveniently overlooked by the U.S. Deputy Secretary of State, John Negroponte, and British Foreign Secretary, David Miliband. The first attack on the Supreme Court was mounted by Nawaz Sharif’s goons who physically assaulted judges because they were angered by a decision that ran counter to their master’s interests when he was prime minister during the 1990s.

Some of us had hoped that, with Benazir’s death, the People’s Party might start a new chapter. After all, one of its main leaders, Aitzaz Ahsan, president of the Bar Association, played a heroic role in the popular movement against the dismissal of the chief justice. Mr. Ahsan was arrested during the emergency and kept in solitary confinement. He is still under house arrest in Lahore. Had Benazir been capable of thinking beyond family and faction she should have appointed him chairperson pending elections within the party. No such luck.

The result almost certainly will be a split in the party sooner rather than later. Mr. Zardari was loathed by many activists and held responsible for his wife’s downfall. Once emotions have subsided, the horror of the succession will hit the many traditional PPP followers except for its most reactionary segment: bandwagon careerists desperate to make a fortune.

Meanwhile there is a country in crisis. Having succeeded in saving his own political skin by imposing a state of emergency, Musharraf still lacks legitimacy and sections of the U.S. establishment are thinking of dumping the President.

Their problem is that, with Benazir dead, the only other alternative for them is General Ashraf Kiyani, head of the army. Nawaz Sharif is seen as a Saudi poodle and hence unreliable.

A solution to the crisis is available. This would require Musharraf’s replacement by a less contentious figure, an all-party government of unity to prepare the basis for genuine elections within six months, and the reinstatement of the sacked Supreme Court judges to investigate Benazir’s murder without fear or favor. It would be a start.

A longer version of this article originally appeared in The Independent (UK). Tariq Ali is an editor of New Left Review. His website is tariqali.org.