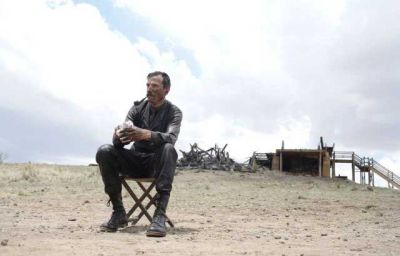 There Will Be Blood
Directed by P.T. Anderson
Ghoulardi Film Company, Paramount Vantage, and Miramax, 2007

Paul Thomas Anderson’ “There Will Be Blood” could not have been released at a more opportune time. With its wicked portrayal of two men who willingly abuse God and family in pursuit of their own greedy interests, it’s the ultimate Christmas movie. And as it weaves through the characters of these men a tapestry of our darkest historical pursuits — the insatiable quest for and dependence on oil and religious fundamentalism — it becomes not just an Old West version of the Bush administration, but something far richer: a pitch-black mirror of the American soul.

To watch the slow moral ruin of the oil man Daniel Plainview (Daniel Day-Lewis) and the small-town preacher Eli Sunday (Paul Dano) is to witness the underbelly of our national character writ large. It’s no wonder that Anderson needs a big canvas. Adapted from part of Upton Sinclair’s Oil!, the film is like a classical epic Western turned so odd and troubled that it’s become estranged from its own genre. The first 20 minutes wordlessly demonstrate Plainview’s ruthless determination as he prospects for silver and then cashes in before seeking medical help for a broken leg. He moves on to oil, and we move ahead a few years to see him adopt a child whose father died in a well accident. It soon becomes clear that the boy’s face is just advertising, a way to smooth over his new father’s ruthless business practices.

The majority of the film is devoted to a subsequent battle of wills between Plainview and Eli Sunday, the preacher and faith healer of the small town of Little Boston. Having received a tip about an “ocean of oil” under the town from Eli’s twin brother Paul, Plainview sets about acquiring as much land as possible, while Eli builds his church as a form of resistance. Two sides of the same coin, the men struggle, humiliating each other in scenes that are simultaneously horrifying and hilarious. Building to a final sequence of genuinely operatic insanity, the film’s tone deftly balances the hard-scrabble with the baroque, as if we were watching Greed remade by lateperiod Sam Fuller.

Shaming his hollow, would-be epics “Boogie Nights” and “Magnolia”, Anderson here filters his epic scale through the oddball eccentricities of “Punch-Drunk Love,” as in the weirdly appropriate fusion of Robert Elswit’s neo-classical photography with the unnerving score by Radiohead’s Jonny Greenwood. It’s a credit to the director that he doesn’t shy away from depicting Sunday’s own exploitation of the town — he’s a charlatan and the movie doesn’t hide it. If the preacher seems less monstrous than Plainview, it’s merely a matter of subtlety in Dano’s nuanced, careful performance when up against Day-Lewis’ titanic malevolence. Seeming 11 feet tall, his eyes piercing through every scene, Day-Lewis takes Plainview to the place where, like Brando’s Don Corleone, the character seems to create his own mythology. Letting down his guard in a drunken conversation with a man claiming to be his long-lost brother, Day-Lewis is so convincing that he becomes a one-man argument for misanthropy as a way of life.