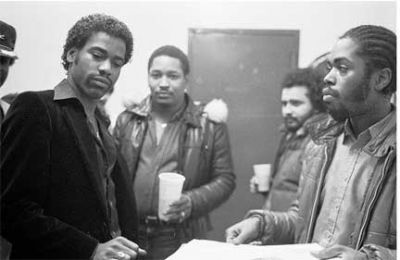 Born in the Bronx: A Visual Record of the Early Days of Hip-Hop
Edited by Johan Kugelberg
Universe, 2007

It’s Saturday night and you’re ready to show
At the place where all the fly people go.
You’ve been working at school or your occupation
Now it’s about time for some recreation.

—From “Weekend” by The Cold Crush Brothers

Recently hip-hop historians have taken the culture’s battle ethos to the realm of revisionism, with claques from such unexpected locales as the American South (!) attempting to stake increasingly dubious claims as the birthplace of rap music. Granted, hammering out a definitive history of hip-hop’s birth is like trying to hold onto a fistful of sand.

The purist, however, will quickly cite a recreation room at 1520 Sedgwick Avenue in the South Bronx, where in August 1973 DJ Kool Herc, a.k.a. Clive Campbell, played the drum breaks from his record collection over and over again to rock a party until the broad daylight. Easy to forget, but hip-hop pre-misogyny, pre-miscegenation — even pre-Def Jam — was the shit the youth of the Boogie Down was getting sweaty to. It was party music, plain and simple. In the glossy tome Born in the Bronx: A Visual Record of the Early Days of Hip Hop, editor and punk historian Johan Kugelberg gathers some key cultural artifacts of that era, a time whose personalities would be considered old school by the old school itself.

Kugelberg has managed to assemble all the right names, landing a foreword from Afrika Bambaataa, the founder and leader of the Zulu Nation and undisputed King of Records. Also included is a meticulously researched timeline by Jeff Chang that traces the birth of hip-hop all the way back to the 1963 completion of the Cross Bronx Expressway, the Robert Moses-envisioned highway that cleaved a path through the Bronx, giving rise to the derelict wasteland the South Bronx became in the 1970s. Though most of the book is light on the written word, essays scattered throughout include one on the novelty rap record craze spawned by the Sugar Hill Gang’s “Rapper’s Delight,” and an incomplete list of some of the more famous battle tapes of rival emcees and crews. A memoir by Cold Crush Brothers alum JDL, along with essays and Q & As with some of the era’s personalities appends the book.

Also collected for the reader are some gorgeous ephemera in the form of flyer art by Buddy Esquire, who, along with contemporary Phase II, was responsible for the evolution of party promotion into an art form unto itself, neatly paralleling graffiti’s development from throw-ups to full burners during the same period. The work is even more amazing considering that Esquire’s cut-and-paste technique prefigured both the rise of desktop publishing software, and the ubiquity of sampling as a method of music production. “The design ideas are fresh, fly and bold to this day,” writes Kugelberg. “His extreme attention to detail and great talent for balanced, eye-catching compositions combine an Art Deco influence (inspired by the facades of the crumbling Art Deco movie theaters that still existed in the Bronx of the late 1970s) with a Star Wars science fiction vibe and a fond¬ness for classic Marvel comics.”

But the standout work here is the photography of Joe Conzo, a scion of New York’s Latin music culture (his father traveled in circles which included the names Tito Puente and Celia Cruz), whose work beautifully relates the dynamism of hip-hop’s early years. Viewed as a body, Conzo’s work functions as the best document of the nascent party culture birthed by DJs like Herc and emcee crews like the Cold Crush Brothers, arguably the Beatles of the Bronx in the late 1970s, for whom Conzo was a gig photographer. In Conzo’s photos, a young Bambaataa is captured in candid pose, digging in the crates. Busy Bee thrusts his microphone towards the crowd during the latter half of a call-and-response. Dozens rock the mic, or assume the classic wide-stanced, braggadocio intimating crossed-arm pose that would come to serve Joseph “Rev Run” Simmons and Darryl “D.M.C.” McDaniels so well in a few short years.

A deep-seated love for hip-hop is evident in the attention to detail paid to the book: the cover features an embossed Esquire flyer mockup, while the dust jacket unfolds to display a 1972 subway map of the Bronx featuring a Conzo and Tony Tone penned legend denoting the borough’s relevant landmarks. Now if we could only get consumers of hip-hop to exhibit the same kind of care in selecting the records they buy.