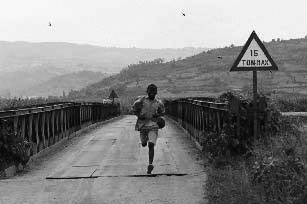 There is a moment in Ezra when the title character (Mamadou Turay Kamara), a 16-year-old former child soldier, stands up during one of the Truth and Reconciliation Commission hearings geared to rehabilitate him, and challenges Western investments in the diamond industry with responsibility for the civil war that has ravaged Sierra Leone. A year ago Edward Zwick’s Blood Diamond extended these investments into the realm of high-profile Hollywood exploitation, streamlining the country’s tragedy into a big screen treasure hunt for its most prized natural resource.

The precious raw material around which Ezra revolves is the fighting force of Sierra Leone’s children, claimed by revolutionary warlords whose agenda of power and greed matches that of the government they oppose and the white representatives of capitalist hegemony they court. Angela Davis uses the term “human raw material” to denote the status of the inmate population of the prison industrial complex, where the “black bodies [that] are easily dispensable within the ‘free world’” serve as “a major source of profit.” Ezra is per¬petually subjected to various kinds of imprisonment: he is kidnapped along with his schoolmates at age six, coerced to serve as an unquestioning, unscrupulous killing ma¬chine for the “Brotherhood” of a warlord named Rufus, held captive by various other rebel factions, ap¬prehended by government troops and made to bear witness before the Commission.

Nigerian director Aduaka allows Ezra a mere throwaway vent against the wide-ranging, intri¬cately tangled web of oppression and hypocrisy that envelops him in the name of corporate profit. Overall, though, his film never achieves the grand-scale outrage of Abderrahmane Sissako’s Bamako (2006), which wields a rich emotional embrace, rhetorical flair and incisive humor to rebuke the International Monetary Fund and World Bank’s imperialist grip on African economic strife. Instead Aduaka limits the child abuse Ezra suffers to its local framework, and thereby indulges the neo-racist “Third Worldization” of his story, rendered from a safely respectful distance through a series of chronological flashbacks.

Ezra participated in a methamphetamine-induced raid on his parents’ village that caused their death — an event witnessed by his sister Onitcha (Mariame N’Diaye), whose tongue was cut out by one of the rebels. Later he was unable to prevent his pregnant wife Mariam (Mamusu Kallon), a fellow soldier and the daughter of a journalist killed by the government, from being shot dead in front of him. In the narrative present, he is administered tranquilizing medication and compelled at his sister’s charge to remember and recount to the Commission the acts of violence he has inflicted and endured.

The traumatic impact of these experiences on the boy’s memory should have produced a more visceral, jarring and contradictory cinematic discourse than the worthy, smoothly reconstructed tale Ezra offers. As it is, the film speaks mostly through its failure to find a voice that adequately translates the predicament of a childhood lost to the mercenary spirit of our global village.

Ezra opened Feb. 13 at the Film Forum, for a two-week engagement