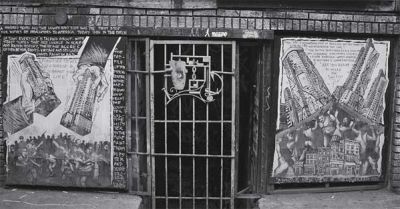 A group of volunteers gathered in ABC No Rio’s community arts center gallery on a cold Saturday morning in early February. The topic under discussion was grave. The future of No Rio — an open space for New York’s radical arts and squatter communities for nearly thirty years — was at stake again.

Unlike the case for much of No Rio’s history, the problem this time was not a hostile city government but the need to raise a huge amount of money.

ABC No Rio was founded in 1980 when group of artists took over an abandoned furniture store on Delancey Street and mounted an art exhibit called “The Real Estate Show.” The show embarrassed the City so much that it closed the space down and offered the artists a nearby rental in exchange for not re-opening it. Founded as an art gallery and performance space, No Rio took its name from a sign on the block that had once read “Abogado Con Notario” but had lost most of its letters.

During the 1990s, relations with the city went sour and for many years eviction seemed imminent. But in 1997 the group reached an agreement with the Department of Housing and Preservation that allowed it to purchase the building for one dollar, provided that No Rio raise the money to renovate or rebuild. In 2006 the exchange became official.

Now, it seems, comes the hard part. No Rio would like its new building to be ecologically sound and larger than the current space. That means raising at least $2 million dollars.

How is a scrappy group of artists and activists, used to functioning on a budget of $80,000 a year, going to raise that much and do it without sacrificing the group’s political credibility?

“I’ve got several jars of squatter dust we could sell,” said Steven Englander, No Rio’s director, a comment that invited giggles from the volunteers in the drafty gallery. His joke lightened the mood, but also contained a grain of truth. Many of the group’s new strategies aim to take something No Rio already has — in this case, deep ties to the city’s squat movement — and convert them into fundraising tools.

Obstacles to Radical Fundraising
No Rio’s proposed new building would be double its performance and exhibition space. It will feature a planted green roof and solar panels, an outdoor garden and a new storefront. It will be a permanent space for do-it-yourself (“DIY”) arts and politics in Lower Manhattan.

Two things about No Rio, however, have made the fundraising campaign difficult. The first is the radical, anarchistic tradition of the space. “You don’t want to abandon the mission and purpose in the effort to raise the money you need,” Englander says. To that effect, No Rio has an informal policy against taking corporate money. There are exceptions for in-kind donations, philanthropic foundations and employee-matching programs. But there’s still a large pool of money No Rio cannot draw from.

The other obstacle is the culture of No Rio’s volunteers, a self-selecting group of people who are very good at making things happen on a shoestring but less able when money itself is the goal. Vikki Law, a volunteer with the darkroom and visual arts collective, notes that No Rio often attracts people who lack social connections to those with money. But the volunteers involved with the fundraising understand that major donations are essential to kick-starting a construction campaign.

This means that No Rio’s internal culture has to change, and the volunteers know it. The organization has already raised $400,000 through a combination of donations, grants and benefits. But in the past several years, the group has averaged between $30,000 a $50,000 a year. At that rate, it could take decades to raise the total amount, putting No Rio’s future in jeopardy. A“doomsday plan” has been developed in case the money fails to come through. This would involve constructing a one-story building at 156 Rivington Street, with few green features.

Putting Your History to Work

No Rio’s unique advantages may outweigh its problems. First among these is its wide circle of friends, which includes current and former volunteers and patrons of the punk/hardcore matinee, the COMA experimental music series, and weekly poetry readings. The same goes for patrons of the print shop, darkroom, ’zine library, computer center, Food Not Bombs kitchen, brewing collective and other programs. There are thousands of people who know and treasure the feeling of spontaneity and wildness that thrives at No Rio. Direct donations from them make up the largest part of the money raised so far.

Volunteers are trying to think of ways to expand this group and break through the organization’s squeamishness about money. One way to do that is to emphasize the ecological sustainability of the planned building. Political groups offer another potential avenue of support, as a completed No Rio would offer a future venue for meetings, workshops, and other events, as it does today.

Finally, there’s that “squatter dust.” No Rio’s building is a unique record of radical arts and politics in the Lower East Side encoded in overlapping layers of graffiti and other artworks that go back to the early 1980s. The group plans to debut its new fundraising strategy of selling off the building piece by piece at the upcoming “Ides of March” show, where visitors will be able to bid on jars of historic No Rio basement rubble, complete with certificates of authenticity.