Hundreds of New York City public school students gathered at the Department of Education’s doorstep this Valentine’s Day — and they weren’t there to deliver a candygram. The students chanted “Asian, Latin, black or white, to fight the cuts we must unite” and “We give Tweed an F!” down Chambers Street in Lower Manhattan on the chilly winter afternoon. 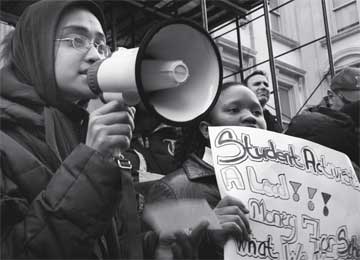 The DOE brought on the rally by slashing the citywide school budget by $180 million in mid-year, at the orders of Mayor Bloomberg. The budget cuts happened overnight, literally.

Principals at all New York City public schools received an email from the DOE on Jan. 31, ordering them to cut 1.75 percent from their operating and programming funds. By the next day the money had already disappeared from principals’ online budgets. The mid-year cut came just days after Bloomberg announced next year’s $58.5 billion city budget, which cuts funding from every city department, including a $340 million cut in next year’s school budget, while retaining $400 million in tax rebates for homeowners.
“It’s a vicious attack on students,” says Bill Johnson, a teacher of printing and graphics at Franklin K. Lane High School in Cypress Hills. “They can’t take this out of our salaries, because that’s protected by the union contract, so this comes straight out of students’ programs.”

First graders to high school seniors were in agreement. “Our school is for second chances, for kids who dropped out or were having problems. I know how important education is because I came back to get mine. At our school they told us we’re going to lose teachers, and we’re already short!” says Andre Laurent, 17, a student at Satellite Academy.

Signs and chants listed many programs likely to get the axe soon: Art classes, Spanish classes, books and science supplies, after school programs and weekend clubs and workshops.

“We have to end the war, not the schools,” says Daina Spencer, a senior at John Jay Secondary School for Research in Park Slope. Spencer was one of the students who helped organize the rally, under the banner of a hastily formed group called Students Against DOEBudget Cuts. They spread the word amongst all five boroughs via email, cell phones and through Facebook.

To contrast the sting that schools will be feeling in canceled art classes and after-school programs, speakers at the Thursday rally singled out a number of multimillion-dollar no-bid contracts that the DOE has given to outside companies of late. One five-year contract, for $80 million, is with the educational publishing company McGraw-Hill. The contract is to provide a variety of practice tests annually to all NYC public school kids grades 3 to 12. As of January the company has yet to deliver a single test for high school students.
Claiming schools should be able to absorb a budget cut, the mayor said recently, “I know of no organization where you couldn’t squeeze out 1.7 percent, or even a lot more.”

And similar to the reasoning that justifies the top 100 CEOs earning more than 1,000 times the pay of an average American worker, the logic behind the school cuts seems to be to squeeze as much as possible from the bottom of the supply chain, i.e. the students.

“Students, teachers, parents, we will stop these budget cuts! But they’ll get away with this unless we keep doing this, keep coming out, keep rallying, keep fighting,” said City Council member Bill DiBlasio of Brooklyn.

Davida Vaughn, a ninth grader at Clara Barton High School in Bedford-Stuyvesant attending her first political rally, has no doubt that students will keep the pressure on. “We’ll be back, definitely. Of course we’ll have more people out here. More people, more progress.”