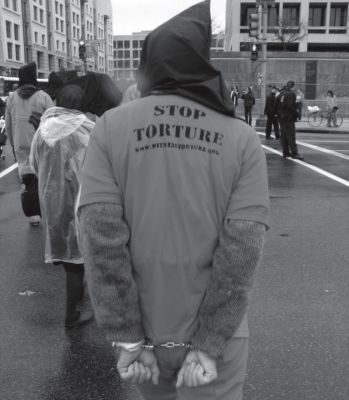 On Jan. 11, the sixth anniversary of the opening of the U.S. military prison at Guantánamo Bay, Cuba, some 50 activists milled around inside the Supreme Court building. Witness Against Torture, which organized the action, had chosen this site because the court will rule soon in the cases of Al Odah v. United States and Boumediene v. Bush on the constitutionality of holding nearly 300 Guantánamo prisoners without giving them the right to challenge their detention in a court of law.

On this cold rainy day, there were few regular tourists present, and we tried ineffectually to be inconspicuous, intently studying the busts of the chief justices that lined the walls. At a signal around 1:15 p.m., several people moved toward the front door, attempting to get outside and unfurl a banner at the top of the steps. Meanwhile, some 250 hooded marchers wearing orange jumpsuits arrived outside after a procession across the National Mall, and dozens of them stood on the steps with their own banner. Inside, I began singing a call and response: “Ain’t we got a right to the tree of life?” The marble floors and walls of the Great Hall reverberated with our voices.

The Supreme Court Police jumped the banner-holders, repeatedly throwing one older woman down on the floor. Another woman started reading a statement, only to have it snatched from her hands. We knelt in two lines along the hall, shouting “Shut it down!” Forty-three individuals were eventually arrested inside, while 37 others were detained outside. Most of us had handed our IDs off to support people, and when asked our names, we each gave the name of a man being held at Guantánamo.

Unused to protests inside the building, the Supreme Court Police took hours to process the 80 protesters, and most of us ended up being reprocessed later at different facilities. The next morning, after some of us had been moved through as many as five different cells during the night, we arrived at holding cells behind the courtroom. I was with 13 other women in a cell about two-thirds the size of my kitchen with a small bench along one wall. Some lucky ones had gotten a sandwich during the 20 hours of custody. Three women in my cell were vomiting from dehydration. (The judge, on hearing of these conditions from our lawyers, ordered the marshals to give us water.) Throughout the long day, we sang, trading songs with the men down the hall. The marshals told us we wouldn’t get out that day if we didn’t shut up.

After we spent 10 hours in shackles, they began taking us up in small groups to appear before a judge on federal charges of protesting at the Supreme Court and, for those inside, an additional charge of “causing a harangue.” “My name is Ellen Davidson,” I told the judge, “but I was acting on behalf of Arkin Mahmud, a prisoner at Guantánamo who was born in China.” This was the moment we had spent 30 hours in jail for. Finally, at least a few of the imprisoned men’s names would appear on the record in a U.S. court.

Meanwhile, the same day as our protest, the D.C. Court of Appeals upheld the dismissal of a suit by four British men against former U.S. Defense Secretary Donald Rumsfeld and other military officials. The men had been held and tortured at the Guantánamo prison. “Because the plaintiffs are aliens and were located outside sovereign U.S. territory at the time their alleged claim arose,” said the ruling, “they do not fall with the definition of ‘person.’”