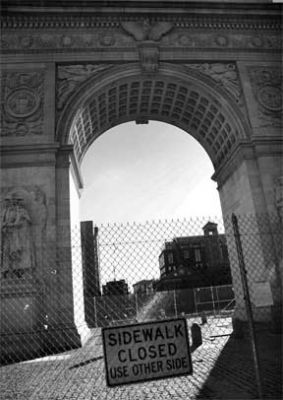 In what was billed as a “memorial” for Washington Square Park, an estimated 100 people gathered at Judson Memorial Church Feb. 6 to protest plans to radically redesign one of Greenwich Village’s most iconic public spaces.

With a fence already surrounding it, protesters marched around the park, singing “We Shall Not Be Moved,” lighting candles and putting flowers in the fence. Opponents denounced the uncovering of skeletal remains that had been in the park for more than 150 years as “desecration.” Judson Memorial Church’s Senior Minister, Donna Schaper, said that the plan had created “a mess across the street” and was irate at what she called the “disturbing” of the dead in the park.

The New York City Department of Parks and Recreation redesign, which is scheduled to be finished by the spring of 2009, will shift the fountain 23 feet in order to be aligned with the arch, level the main plaza, move the dog-run and provide more green space. The renovation will also add a four-foot wrought iron fence around the park.

Critics of the plan say that the redesign of the park is unnecessary and fear that the Parks Department’s renovation will restrict space for political protest, and change the demographics of the users of the park.

“Everyone agrees we need repairs, but you don’t need to close the park … or change the spirit of the park.”

Greenberg says that the plan is a part of Mayor Bloomberg’s larger effort to transform New York City into a haven for the rich and powerful, which includes the privatization of many of the city’s public spaces.

The $16 million renovation at Washington Square Park will only cost the city an estimated $7 million, with the rest coming from private donors such as the Tisch family and New York University. “The city wants to change the way the park is financed, and allow the back door privatization of the park through a reliance on private funds and NYU donors,” said Greenberg.

But, Greenberg and the Open Washington Square Park Coalition are digging in for a tough fight. “Our options are limited, and we’ve lost a lot of battles in the past three years,” Greenberg said. We’re fighting against a powerful mayor.”

Photo: No Tresspassing: Washington Square will be off-limits as it undergoes major renovations.