While most comics anthologies like Mome and Drawn and Quarterly aim for diverse and multicultural content, World War 3 Illustrated has consistently provided a breadth unmatched even by contemporary publishers. For their latest anthology, Facts on the Ground, the collective culled stories from around the world, including Baghdad, Johannesburg and El Salvador. As the title suggests, most are first-hand accounts, featuring everyday folks up against institutionalized corruption. 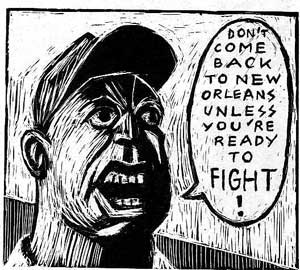 The first comic, by writer and Voices in the Wilderness activist Cathy Breen with artist Edowyn Vazkez, illustrates a letter by an Iraqi woman and the daily perils she faces in occupied Baghdad. Peter Kuper captures the complicated and sordid story of last year’s Oaxaca teachers’ strike and their battle with the state’s murderous, corrupt governor — which ended with the death of numerous people, including journalist Brad Will — in his firsthand mixed-media account “Oaxaca.”

Other comics take a look at familiar locales. Standouts include Seth Tobocman’s excerpt from his new book Disaster and Resistance (AK Press), about the struggle of residents of a NOLA housing project to return home after the devastation of Katrina and authorities. Mac McGill’s “Hurricane Katrina” is a meticulously rendered expressionist pantomime about life, loss and hope of New Orleans residents. Fly’s interview with Bill DiPaola serves as the basis for her rollicking, illustrated history of radical environmentalist group Times Up! “NYC Cyclists Memorial” is Christopher Cardinale’s lyrical and poignant mixed-media comic about the bicyclists killed by motorists and the city’s inhospitability to bicyclists.

The eclectic array of visual and narrative styles sometimes makes for difficult reading. Nicole Schulman and Sabrina Jones’ absence is definitely felt in this go-around. As evidenced by the inclusion of Mumia Abu-Jamal’s “From Abu-Ghraib to America” and Carlo Quispe’s “Pulgarito de las Americas”, World War 3 doesn’t shy away from controversy. The publication plays a vital role in comics, collecting works with a radical perspective in a single anthology. Single, they would get lost in the glut of comics produced on monthly basis. With better distribution, the anthology could reach outside its traditional audience of activist circles and the anarcho-punk scene.

Vigorous and dedicated, World War 3 has frequently been ahead of the political curve, but its many dismal portrayals of political subjects and us-versus-them narratives often work to its detriment. Though Facts on the Ground isn’t as collectively powerful as previous World War 3 anthologies Life During Wartime or Unnatural Disasters, the current issue adheres to the publication’s goal of social responsibility and political engagement.