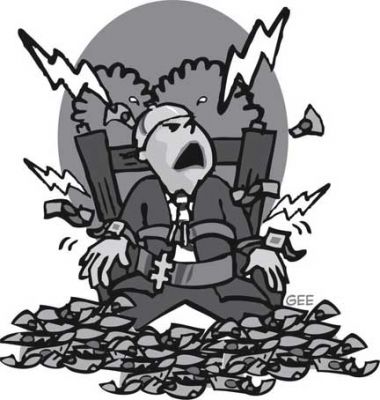 Amid a slumping economy, our selfless agents in Washington have a series of stimulating ideas to get votes. Oops, I mean to help hard working families that vote. Help how? They will be sending tax rebates that should arrive in June, around the time the presidential election shifts into high gear. Along with the checks are various assistances to business, which should help our political leaders with fundraising and media coverage.

The White House proposal is to distribute $600 to individual taxpayers and $1,200 to households. The average range for a monthly mortgage payment is $1,800 to $2,400, including related costs. The average minimum monthly credit card payment is $400. This gives you an idea of how vital and massive the assistance will be. Of the $150 billion proposed stimulus, around $100 billion would go to individuals and the rest to businesses to encourage investment spending.

But before examining the stimulus plan, we need to peek in on the slump that is inspiring all this stimulation.

HOW THE ECONOMY TANKED

Financial markets have suffered as builders, bankers and retailers have seen their stock prices and profits tumble. Home buyers, car buyers and credit card holders are increasingly paying late or missing payments. Many creditors have and will likely continue to report massive losses. This kind of pain, pain for banks, financial firms and large investors, registers quickly in Washington.

Much assistance has been given to distressed financial institutions. Meetings have been held, mergers facilitated and massive quantities of cash — hundreds of billions—has been made available.

The Treasury Department and Federal Reserve have led these efforts. The Fed has slashed interest rates five times since last fall, most recently a 0.5 percent cut on Jan. 30. The cuts apply to interest rates banks get when borrowing from the Fed and interest rates bank charge each other to borrow reserves. So far this has only slowed and softened our descent. Interestingly, these actions were fast and very large and are ongoing.

BORROWING AGAINST THE FUTURE

Less obvious to those inside the Beltway has been growing pain in American households. Well over a quarter million people lost their homes in the second half of 2007. More than a million Americans could face foreclosure in 2008. Tough times mean Americans have been spending less and many have been pushed off the debt cliff.

With stagnant wages and rising prices, millions kept up middle class spending by turning their homes into ATMs. Between 2002 and August 2007 we borrowed an addition $4.4 trillion in home loans. This almost matches precisely the total increase in disposable income — all types of income to all people — of $4.5 trillion during the same period! That is how we ended up with a big, fat, dragging slump and $10.4 trillion in home mortgage debt.

The idea of more borrowing for consumer spending is based on years of responding to economic trouble with more borrowing and more spending. Present plans bring to mind a great quote from Albert Einstein: “Insanity is doing the same thing and expecting a different result.”

The stimulus package is modest in size, scope and likelihood of success. Fiscal policies like these require months to have broad economic effects — if they work at all. Losses in wealth from one hour of turbulence in the markets often exceed $150 billion. And the stimulus proposal represents just 0.7 percent of the value of America’s $21 trillion in real estate holdings. If house prices continue to decline, this will dwarf the best case results of the stimulus package outlined. Nonetheless, these plans have symbolic value that is important and will help some of the affected parties. Something beats nothing.

I am not excited about the stimulus, however. Giving more money to consumers and having Uncle Sam borrow the difference is a poor cure. Our larger more structural problems stem already from too much consumer spending and massive government debt, $9.2 trillion at this moment.

If we really need to free up funds to assist the public, perhaps we could raise some money by trimming our expensive war habit in Iraq.

Max Fraad Wolff is an economist who teaches in The New School University’s Graduate Program in International Affairs.

For more on the economy:
A Better Way to Stimulate