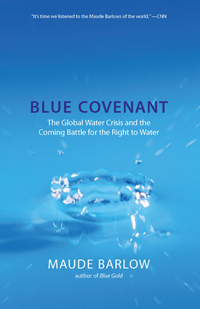 Blue Covenant: The Global Water Crisis and the Coming Battle for the Right to Water
By Maude Barlow
The New Press, 2007

Two billion people live in regions of the planet that experience freshwater shortages. Our supply of clean water, once considered infinite, is dwindling, leading many to proclaim that the wars of the future will be fought over this life-sustaining liquid. The emerging reality is alarming: whoever controls water will control life on the planet. After years of quiet maneuvering by powerful business forces, much of that control is in the hands of the corporate world.

While many countries in the Global North remain oblivious, soaking themselves in various brands of boutique bottled water, in the Global South a child dies every eight seconds from lack of clean drinking water. Women in African villages are forced to travel miles over parched lands for water because nearby lakes have been depleted by farms that export roses to Europe. The situation is at its worst in dense urban centers across the developing world where the poor living in slums have no access to water and sanitation despite water pipes at their doorstep — because the price of water remains beyond their means.

Meanwhile, author and activist Maude Barlow has been galvanizing worldwide opposition to the exploitative practices of the water corporations. As National Chairperson of The Council of Canadians, Barlow is at the head of Canada’s largest citizen’s advocacy group; she also founded several international and U.S.-based organizations fighting for equitable distribution of the world’s water. In 2007, she received the Right Livelihood Award, popularly called the “alternative Nobel Prize,” for her work. In her latest book, Blue Covenant: The Global Water Crisis and the Coming Battle for the Right to Water, Barlow provides an authoritative account of the global water crisis and the factors that converged to arrive at the critical point at which we now find ourselves.

She persuasively shows how destructive industrial and agricultural practices, as well as wasteful lifestyles, led to the disruption of the hydrological cycle and contamination of groundwater reserves. Transnational corporations, acting through the World Bank and other support organizations, coerced the governments of developing countries into privatizing their water sectors. Given free reign, these corporations did exactly what they are mandated to do — pursue a profit for their shareholders by holding back on investments and charging prices that only wealthy “water consumers” could afford.

Ultimately, she reveals the incompatibility of profit-driven corporate principles with conservatism, along with the neoliberal falsehood that a competitive private sector improves the lives of those mired in poverty.

The most valuable part of Blue Covenant is its affirmation of water as a human right, rather than an economic good. The book calls for a United Nations convention that would protect water as “part of the global commons,” guaranteeing conservation, and require governments to provide water to their citizens as a public service.

Barlow’s vision for a sustainable freshwater future is largely emerging from small indigenous and women’s groups in the developing world. With stunning courage, these water warriors have stood up to the water cartel, nucleating the beginning of a worldwide movement whose voice is slowly but most definitely starting to be heard.

Written in an insightful and straightforward manner, Blue Covenant is an engaging, eye-opening account that will hopefully raise awareness about one of the most important issues of our time.