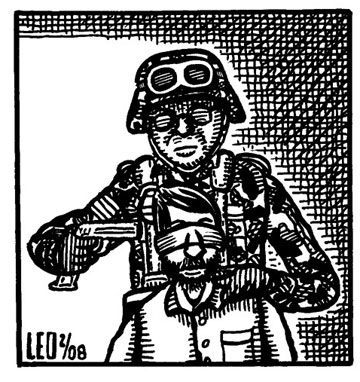 It took a lot of effort during Betrayed, a new drama at The Culture Project about Iraqi interpreters working in the Green Zone, not to shout at the American characters to stop mistreating their closest Iraqi allies.

I shook my head when the translators were denied high-level security-clearance cards, and tapped my feet anxiously as the young men and woman, thinking they were protected by a sniper, walked home alone each night through Baghdad’s dangerous streets. I gasped out loud as a security guard dragged a translator for a low-level American diplomat away in handcuffs, accusing him of working for insurgents when he had merely tried to open a dialogue with an Islamist group, as the diplomat had requested.

Adnan (Waleed F. Zuaiter), a book and cigarette salesman, Laith (Sevan Greene), a heavy-metal fan, and Intisar (Aadya Bedi), a former student of English literature, share a love of American pop culture and a sense of non-belonging in Iraqi society. Unlike many Iraqis, the in¬terpreters saw the U.S. invasion as a chance to fulfill their potential as idealistic, cosmopolitan citizens, which had been squashed by Saddam’s regime.

Laith goes to work for a Marine translating requests and complaints from people on the street; Adnan and Intisar apply directly for positions at the U.S. Embassy in the Green Zone, hoping that their work with the Americans will one day lead to their own goals, such as a career with UNESCO. Then they realize they are not so much partners in America’s attempt to rebuild Iraq as an expendable (and highly mistrusted) source of labor.

Betrayed was based on a recent New Yorker article by George Packard, who knit together the stories of various real-life characters to form the script. Pippin Parker, who worked with The Culture Project in 2004 on The Democracy Project, directed the show.

Packard’s diligent reporting makes the play’s storyline all the more tragic, frustrating, and poignant, but several brilliant acting moments prove there are some things theater can capture that investigative journalism can’t. As the feminist translator, having received threats from neighborhood extremists, vacillates over whether or not to wear a hijab to work, and her male colleague is permanently removed from the Green Zone, their expressions capture all the tragic ironies of the U.S. invasion. As Baghdad slides into extremism, we see the shocking lack of support offered to Iraqis who were eager to turn the Bush regime’s promises of peace and democracy into a reality.