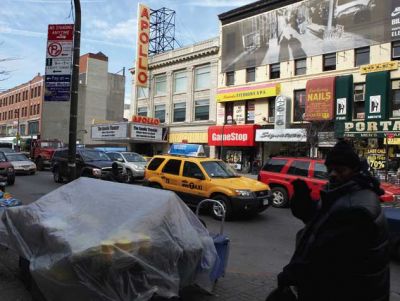 “The reality is that African Americans have ever owned only a fairly small percentage of any property in Harlem … because Harlem was redlined.”

Redlining is the unethical practice in which financial institutions, such as banks or mortgage lenders, refuse to lend money in neighborhoods populated by people of color. It is one of the main reasons so few Harlem residents own real estate in their community.

Although informal housing discrimination and segregation has a long history in the United States, it formally began in 1935 when the Federal Home Loan Bank Board helped create “residential security maps” to indicate the level of risk for real estate investments in 239 cities. The maps defined most black neighborhoods as ineligible for loans, including Harlem.

Private banks picked up on the practice and began literally drawing red lines on maps around neighborhoods where they would refuse to offer financial services.

The Federal Community Reinvestment Act was passed in 1977 and was meant to outlaw this form of racial discrimination, but critics say redlining continues in more subtle ways. Financial lenders often fail to market their services in black neighborhoods. Studies show they also set minimum loan thresholds above the small home or real estate purchase loans often sought by low-income people of color, and require high down payments.

An example of redlining in Harlem in the 1980s comes from Towers on the Park North. Chemical Bank was one of the top lenders in the New York City Metro area and also had a low percentage of loans to low and moderate-income people. But in 1985, it loaned $47 million to developers who built the 20-story high rise of condominiums on 110th Street, where even the cheapest apartments were beyond the means of average Harlem residents. The loan was eight times larger than the total private mortgage financing for all of Central Harlem in 1982.