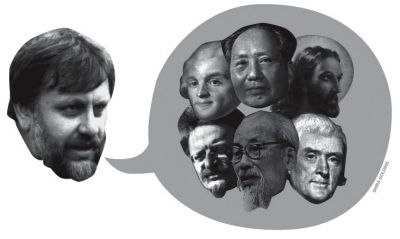 Mao: On Practice and Contradiction
(introduction by Slavoj Žižek)

Thomas Jefferson: The Declaration of Independence
(introduction by Michael Hardt)

Ho Chi Minh: Down With Colonialism!
(introduction by Walden Bello)

The Levellers: The Putney Debates
(introduction by Geoffrey Robertson)

All Published by Verso, 2007
Few people talk much about revolutions any more, and many of those who do work in advertising. “The digital download revolution” is one of the more common invocations of the word “revolution” in 2008. The political left, in particular, seems to have left it far behind. And yet on a basic level, argue the authors included thus far in the excellent new Verso series Revolutions, revolutions are more than marketing — no matter what the cynical salespeople of the post-ideological Adbusters era might have to say. The eight books in the series, wonderfully packaged in a set of brightly-hued and ideologically themed colors, run the gamut from the Gospels of Jesus Christ to The Putney Debates to Down With Colonialism! And the almost uniformly excellent introductions written by modern-day revolutionary theorists like Michael Hardt, Walden Bello, Terry Eagleton and Slavoj Žižek should justify plunking down hard-earned cash on writings mostly available for free online.

With a series so wide-ranging in scope and temperament, where to dip in first? One option is to go with the oddest selection to date — and I don’t mean with The Gospels, whose pages have been inspiring revolutionaries of various stripes for thousands of years. No, surely the inclusion of the Declaration of Independence and selected letters of the (aristocratic, slave-raping) Thomas Jefferson has to be the first sign that this series isn’t content to stay within the lines. In the best case, Michael Hardt’s introductory reinterpretations of Jefferson salvage the revolutionary kernel of much radical American thought; in the worst case, Hardt’s vague discussion of Jeffersonian popular education and “democracy as a means and ends” dresses up a vapid species of liberalism as militancy. Although I generously sympathize with the former view, an equally useful function of Hardt’s introduction is that it serves as a foil for Slavoj Žižek’s far more extreme (and far more disturbing to American ears) meditations on revolutionary transition and proletarian “dictatorship.”
Žižek, having written three introductions thus far, has the advantage of profligacy in order to make a point. For those familiar with his recent argument in favor of a “return to Lenin,” the point won’t be entirely new, but Žižek, as one of the most important radical intellectuals living today, has earned the right to carry his argument to a larger audience.

In a sense, Žižek sets himself the task of defending the indefensible (with qualifications) — the Terror of the French Revolution, Trotsky’s “war communism,” and Mao’s “cultural revolution.” He does this by attacking the very core of Hardt and Jefferson’s arguments, debunking democracy in favor of the dictatorship of the proletariat (and, it is implied, of the revolutionary party). Democracy, for Žižek (as it was for Trotsky, Lenin and others) is a dictatorship of the bourgeoisie that masks itself in the idealist illusion of freedom. To the degree this is true, Žižek argues, a dictatorship of the truly oppressed is a far more preferable alternative.

Of course, in any series as sweeping as this one, a multitude of other issues arise. One can criticize Terry Eagleton’s introduction to The Gospels, for neglecting any discussion of “liberation theology,” which emphasizes the Christian mission to bring justice to the poor and oppressed. Perhaps more fundamentally, later volumes in the series seem to move away from the focus on revolutionary theory to a more situational discussion of revolutionary practice. While there is nothing wrong with
this shift in focus per se, it is doubtful that any general reader would be prepared to wade through more than 200 pages of Ho Chi Minh’s detailed strategic discussions of the Vietnamese planned economy, despite Walden Bello’s praise of Ho’s “non-theoretical revolutionary pragmatism.”

What other volumes could be included in future installations of Revolutions? Certainly, one or two 19th century anarchist thinkers will make the cut (complete with black covers). Revolutionary feminist writings, and introductions written by women, are absent to an almost offensive degree (pink covers?).

Two additional groups of writings could also be added — entries that, like the juxtaposition of Mao and Jefferson, would help continue the usefully schizophrenic tenor of the series. The Islamic revolutionary movements may be a far cry from the series’ current focus but, combined with Foucault’s reflections of the 1979 Iranian revolution and his writings on biopower, their inclusion in the series would mark a productive engagement of our current historical zeitgeist. On the other side of the spectrum, a collection of writings on revolutionary nonviolence (Tolstoy, Gandhi, King) would be most welcome. Biopolitical Islamism and the Civil Rights movement — the inclusion of these bookends of our (post)modern revolutionary consciousness would carry Verso’s excellent series well into the 21st century.

For more information on these books, please visit http://www.versobooks.com/series/revolutions_series.shtml

For other book, film and music reviews, visit http://www.indypendent.org/category/reviews/