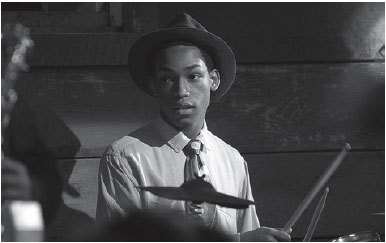 Two-thirds of the way through Honeydripper, the piano player Tyrone “Pine Top” Purvis (Danny Glover), imagines the first Black man who ever played a piano. It was a house slave, he says, who could play African instruments, and who could “play mud if you give him the key and the tempo, he’s got music in his head, in his heart, in every damn piece of him there’s music.… And one day … he’s alone in the room with that piano and he comes over and sits down on the bench …and he spreads his fingers out … and he … thinks, ‘Lord help me, I could do some damage with this.’”

And his best friend and partner says, “Would have liked to been there. I mean to hear the cat play, not none of the rest of it.”

The moment is the heart of Honeydripper, an epic in miniature, the story of Black American music told through one weekend in the life of the Honeydripper Café — and Pine Top, its pianist and proprietor — in the rural Alabama town of Harmony in 1950. The café is failing; no one wants to hear Pine Top’s barrelhouse piano anymore.

Locals are going to a neighboring bar with a juke box full of rhythm and blues. Pine Top decides to import a blues guitar star from New Orleans, for one night only. Then a guitar-playing stranger drifts into town, with a new kind of music, and we are present at what may be the birth of rock and roll, at exactly the kind of Black bar that educated rock pioneers Elvis Presley and Jerry Lee Lewis.

Honeydripper is a lyrical departure for the usually austere John Sayles, who wrote, directed and edited the film. As always, he paints a large canvas, but this time, he’s tugging at heartstrings as well as minds. He has the help of stellar turns by Lisa Gay Hamilton as Pine Top’s spiritually troubled wife Delilah, Stacy Keach as Harmony’s malevolent white sheriff, Keb’ Mo’ as a blind street musician who serves as a chorus for the film, and, in a single-scene appearance, Mary Steenburgen as the wistful wife of Harmony’s wealthiest citizen. But it’s Glover, in the performance of his career, who holds the film together.

All that said, this review is by a white woman of a film by a white man about Black life. From where I sat, it appeared to be Sayles’ masterpiece, a soaring portrait of human resilience in general and Black resilience in particular.  Whether or not it’s a true picture is for others to say, not me — or Sayles.