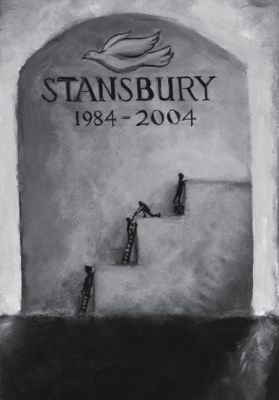 Four years after the police shooting of Timothy Stansbury Jr., the unarmed African-American teenager’s death serves as a harsh reminder of officer impunity.

“Life goes on, but you don’t forget it,” said Tiffany Brown, who lives across the street from where Stansbury, 19, was shot in a Brooklyn housing project. “A cop can kill anyone and get away with it.”

Bedford Stuyvesant has the highest rate of fatal shootings by New York Police Department officers — five since 2000 — according to an analysis by Color Lines magazine.  It is where police shot Kheil Coppin last November when they mistook his hairbrush for a weapon.

“I shouldn’t be scared of the cops,” said Brown. “But it’s like the cops are programmed to kill.”

Officer Richard Neri Jr. and his partner encountered Stansbury around 1 a.m. on Jan. 24, 2004, during their vertical patrol on a rooftop in the Louis Armstrong Houses at 385 Lexington St.

When they came to the last stairwell Neri opened the door to head downstairs. Stansbury reached for the same doorknob as he and his friends took a rooftop shortcut.

Neri was patrolling with his gun out of its holster and his finger on the trigger when Stansbury opened the door, according to police reports. The 11-year veteran of NYPD, who is Caucasian and from Long Island, said he was surprised to encounter Stansbury and accidentally shot him in the chest.

The day Stansbury died, NYPD Commissioner Ray Kelly said there was “no justification for the shooting.” Newspaper tabloids splashed the word “Unjustified!” across their front pages.

Residents of the Louis Armstrong Houses referred to the shooting death of their former neighbor as a “rooftop murder.” They attended weekly vigils in order to keep the case in the news as prosecutors from the Brooklyn District Attorney’s office presented criminal charges against Neri to a grand jury. But, in February 2004 a grand jury declined to indict Neri and he remained on desk duty at the NYPD’s Housing Division in Brooklyn. He was suspended in 2006 for 30 days, had his weapon permanently revoked, and transferred to the Property Clerk division.

Stansbury’s mother settled a $2 million civil suit with the City in May 2007. She said she was still unhappy with the case because Officer Neri did not lose his job.

“No police officer comes to work saying I’m going to shoot somebody,” said O’Leary. “The vast majority of them never fire their weapon while on patrol.”

Standing behind Stansbury when he was struck was his best friend, Terrence Fisher, 19, who was a few months into directing a short documentary about gun violence in Bedford Stuyvesant called “Bullets in the Hood.”

“I could have picked up a gun, I could have rioted,” said Fisher, who has lost eight friends to gun violence. “Instead, I picked up a camera. I wanted to talk about Timothy and what was happening in my community.” Friends borrowed Fisher’s video camera and went up on the roof to the stairwell doorway where Officer Neri shot Stansbury and pointed out that a vent next to the door allowed them to clearly hear people ascending the stairs.

Fisher finished his personally narrated halfhour documentary with a new focus on his friend’s death. He joined with Stansbury’s mother to show the video in his neighborhood.  But the outcome of the case has arrived at an impasse of poor community relations with police in an area under heavy patrol.  “A lot of young people don’t really hate the police,” said Noel Leader a retired police officer from the 79th Precinct. “They hate racist, abusive police. But when you walk around Bedford Stuyvesant people don’t feel police are there to serve them.” Candles from monthly vigils no longer clutter the stairwell entryway where Stansbury lived and died. His neighbors say that while no one takes shortcuts across the roof anymore, their lives have not changed much.

Crime rates in Bedford Stuyvesant remain steady despite the thick presence of police. NYPD guidelines still allow officers to use their own discretion for patrolling with their weapons drawn in high-density residential areas.

“They get away with murder,” said former neighbor Joe Stanley, as a police car drove down the block of Lexingon that has been renamed Timothy Stansbury Jr., Boulevard.