When Hollywood gathers Feb. 24 to hand out the 80th awards of the Academy of Motion Picture Arts and Sciences — a.k.a. the Oscars — millions of people around the world will be watching. While some believe the awards actually go to the best films, others will know that whoever gets an Oscar is guaranteed a more lucrative future in the movie business than those who don’t. 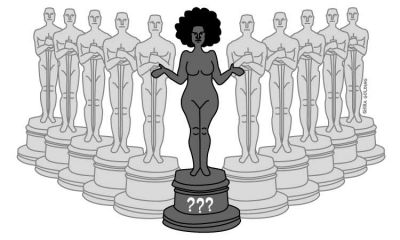 And that night some significant names will be missing from the lists of winners. Having been completely passed over in the nominations, Denzel Washington’s The Great Debaters and John Sayles’ Honeydripper won’t be getting any Oscars, nor will Washington — for Debaters or American Gangster — or Danny Glover, or Lisa Gay Hamilton.

The Great Debaters, Honeydripper and American Gangster are all about African-Americans, and movies about African-Americans don’t win Oscars — nor, by and large, do the black actors appearing in them. Oscar is white at heart — and, although anatomically neuter in appearance, male. He’s also pretty entrenched in the upper class.

Not once, in 80 years of supposedly rewarding moviemaking merit, has the academy named as Best Picture a film about African-American life. Two Best Pictures — In the Heat of the Night in 1968 and Driving Miss Daisy in 1990 — were about black individuals living and working in a white world (and in both cases, the white co-star got the acting Oscar).

Of course, for much of Oscar’s life, Hollywood didn’t make many movies about black people. But even when that changed, those movies didn’t win Academy Awards. Only three movies actually about African-Americans have even been nominated for Best Picture: Sounder in 1973, A Soldier’s Story in 1985, and The Color Purple in 1986. All were directed by white men. In 1992, John Singleton became the first and only Black nominee for Best Director, for Boyz N the Hood, bypassed in the Best Picture nominations. (That was the same year Oscar ignored Julie Dash, whose Daughters of the Dust had just become the first full-length feature film in general release directed by a black woman.)

None of the films of Spike Lee, arguably the country’s most prolific and creative filmmaker, has been nominated as Best Picture, nor has he been nominated as Best Director. (In 1998 a movie of his did get a nomination as Best Documentary: 4 Little Girls, about the 1963 bombing of the 16th Street Baptist Church in Birmingham, Alabama, that killed four Black schoolgirls. It didn’t win.)

Movies by white women have fared marginally better: One woman-directed film has been nominated as Best Picture — Barbra Streisand’s Prince of Tides in 1992 — but Streisand wasn’t nominated as Best Director. Two years later, Jane Campion did get a Best Director nod (for The Piano), and in 1994, Sofia Coppola was nominated for Lost in Translation. None of those pictures or women won. To date, the Best Director’s title is still as safely male as it is white.

It gets worse: Few films about women have won the Best Picture title, and only one about a relationship between two women: the 1983 mother-daughter tearjerker Terms of Endearment. Remember Thelma and Louise? It never had a chance.

Merely being named for a woman — let alone two — seems to substantially decrease Oscar chances. Of the 80 best pictures since 1927-28, only six won carrying that burden: Rebecca, Mrs. Miniver, All About Eve, Gigi, Annie Hall and Driving Miss Daisy. (Three times as many — 18 — were named for men.) Maybe if the movie had been called Thelma and Her Car …

It wouldn’t have helped. The odds against a film plummet more steeply yet if it not only bears a woman’s name, but was adapted from a work by, or written by, a woman (as was Thelma and Louise, created by screenwriter Callie Khoury). Only two movies on the short list of woman-named Best Pictures were woman-originated: Rebecca (from Daphne DuMaurier’s novel) and Gigi, from stories by Colette. Pictures about women but not bearing their names don’t win, either—think of Funny Girl, An Unmarried Woman, Coal Miner’s Daughter, Sense and Sensibility, The Hours and The Queen, to name just a few. Even a strong woman’s role appears to diminish the likelihood of victory. Nearly a third — 25 — of the best picture winners have contained the “best performance by an actor in a leading role,” but only 11 had the “best performance by an actress.”

Doing the Right Thing at Last?

For now, women — if not women’s stories — are guaranteed at least two acting Academy Awards a year. African-American actors, on the other hand — like African-American directors — are guaranteed nothing, and nothing is what they got for most of Oscar’s life. Until six short years ago, black actors were almost as thoroughly locked out of the Oscars as were black stories and black directors like Spike Lee, John Singleton, Julie Dash, and Gordon Parks. The minimal recognition African-American actors did receive came via movies in which the stories — and the lead roles — were split with, or subordinated to, parallel white ones.

And so we arrive back at Gone With the Wind and the question of how far we’ve come. It was GWTW that in 1940 broke the Black actors’ barrier, when Hattie McDaniels, for her best performance in a supporting role as Mammy, became the first African-American to be nominated for and win an Oscar. From then until 2002, exactly three more awards went to black actors. In 1964, Sidney Poitier won the first-ever Oscar given to an African-American for a best performance in a leading role, for Lilies of the Field. It would be 38 years before another black actor won the top prize; the next two were for supporting roles — in 1983, to Louis Gosset, Jr. for An Officer and a Gentleman, and in 1990, to Denzel Washington, for Glory. McDaniels, Poitier and Gosset had played black people vis-à-vis white society. Washington played a private in the first all-black volunteer company in the U.S. Army, but the white actor Matthew Broderick had top billing as the white officer who led the company. The long list of unrecognized distinguished black actors includes the great — but leftist — Paul Robeson, the late Ossie Davis, Dorothy Dandridge, Cecily Tyson, Ethel Waters, and James Earl Jones, possessor of one the most iconic, instantly recognizable voices in film history.

Yet something seems finally to have changed. In 2002, Halle Berry and Denzel Washington made movie history when Berry became the first black woman to win a Best Actress award, Washington became the second black man to win the Best Actor award, and the two became the first pair of black actors ever to win Oscars in the same year. Both won for starring roles opposite white actors: Berry for playing a black woman with a white lover in Monster’s Ball, Washington for playing a black cop with a white partner in Training Day. Not until three years ago, in 2005, did a black actor win the lead acting Oscar for playing a black man in a black world: Jamie Foxx as Ray Charles, in the biopic Ray. The same year, Morgan Freeman won Best Supporting Actor for Million Dollar Baby, and last year, Forest Whitaker and Jennifer Hudson repeated the double-Oscar trick for, respectively, The Last King of Scotland and Dreamgirls.

Thus, for those keeping track, in the last three years, black actors have won four out of 12 acting Oscars. Whether this heralds a change in Hollywood’s treatment of African-Americans remains to be seen—but this year’s freezing out of Washington, Glover, Hamilton, and Honeydripper suggests it hasn’t happened yet.

A Touch of Class

Oscar is also an elitist snob. The list of Best Pictures featuring kings, princes, and emperors includes Hamlet, Ben Hur, A Man for All Seasons, Amadeus, The Last Emperor, Braveheart and Lord of the Rings: The Return of the King. On the other hand, only two movies about workers have ever been named Best Picture: How Green Was My Valley and On the Waterfront. (Stretching a point, one could add Driving Miss Daisy to that list.) The handful of additional, non-winning nominees includes Norma Rae and Erin Brockovich (both presumably double-doomed by being about working-class women). The majority of the past 80 years’ worth of films that were consciously about working people and their real lives — including the likes of The Grapes of Wrath, Salt of the Earth, Silkwood and Matewan — never reached the nominations lists.

Or maybe Oscar snubbed those films just because he’s resolutely apolitical. Warren Beatty won Best Director in 1982 for Reds, the first Hollywood film to feature “The Internationale” in its soundtrack, but the movie wasn’t named Best Picture, and Beatty’s more pointed — and contemporary — Bulworth was ignored in 1999. Other slighted political films over the years include The China Syndrome, Born on the Fourth of July, Good Will Hunting, Good Night and Good Luck, Syriana and most of the films of John Sayles and Spike Lee. Substantially overlooked this year was the handful of antiwar movies including In the Valley of Elah.

That should get Best Picture.

Editors’ note: Whoopi Goldberg also received a supporting Oscar for Ghost in 1991, and Cuba Gooding Jr. for Jerry McGuire in 1997.