Interview with Ernesto Ladesma
Interview and Translation by John Tarleton

In January 1994, the indigenous rebels of the Zapatista Army of National Liberation (EZLN) shocked the world by launching an armed uprising in Mexico’s southernmost state of Chiapas. They were quickly forced to retreat from major towns and cities, but have since been able to carve out control of a large swath of the state while maintaining an uneasy truce with the Mexican government, which has established 56 permanent military bases inside Zapatista-held territory.

Ernesto Ladesma, Director of the Chiapas-based Center of Political Analysis and Social and Economic Investigations (CAPISE), closely tracks events in Zapatista communities and has become increasingly alarmed at the aggressive counter-insurgency strategy being pushed by Mexico’s new right-wing president Felipe Calderón. During a recent visit to New York, Ladesma spoke to The Indypendent about the situation in Chiapas as well as the growing militarization of Mexico society. 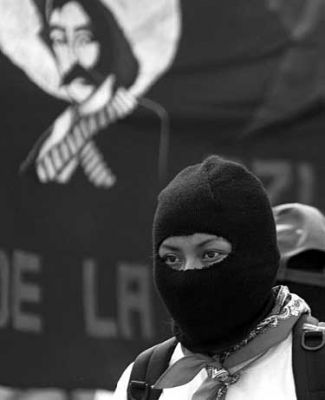 JT: The Zapatista’s military leadership recently warned that the “fetid odor” of war is in the air. How serious is the situation at the moment?

EL: We have documented the reactivation of paramilitary groups and a restructuring of the Mexican Army in indigenous territories. Ninety percent of the Mexican Army in Chiapas are Special Forces. The land the Zapatistas recovered through blood and fire in 1994, the government is once again expropriating and taking from the Zapatistas and is transferring to other indigenous organizations. In general, there is an inter-communal confrontation. The information published by the media is that, “The indigenous peoples are killing each other like savages.”

We also see a much stronger reactivation of the municipal, state and federal police in tandem with paramilitary groups. On Feb. 1, we began to see cases of torture. We haven’t seen these in more than ten years at these levels. We are accustomed to seeing the difficult situations that the indigenous people have to live. But, not like what is happening now. The impunity of the authorities is total. There is no punishment for their crimes.

JT: How are the Zapatista communities responding?

EL: The understanding is to not respond to the provocations, to not respond to the aggressions with more aggressions. The Zapatistas have their civil government — the Councils of Good Government. The Councils have said that if the government forms paramilitary groups, and their neighbors are misled into joining, we are going to insist by all means possible that there is a dialogue with these indigenous organizations that are opposed to us.

JT: What is the impact of the new government of Felipe Calderón on this situation?

EL: The social movements in Mexico are enduring a repression that we have not seen in many years. Felipe Calderón practically militarized the nation. There are roadblocks everywhere.

There’s currently a proposal to modify the law in Mexico to allow the police and the army to enter people’s homes without a judge’s order. All the political parties are in support. The signals are very clear: they are going to apply the mano duro (“heavy hand”) to all those who are not in accord with the nation’s politics and economics. In the case of the Zapatistas, the repression is armed repression.

JT: Why is the repression increasing now? The previous government was also a conservative one.

EL: Calderón is an illegitimate president. He lost the 2006 election. He didn’t win. He was imposed. So, he entered office in a very weak state with practically zero credibility. That’s why he delivered himself into the hands of the Army. He doesn’t have another arm of government for being able to impose order in a repressive manner.

What we are seeing is ever-greater social discontent while the media says nothing. We are expecting that the years 2008, 2009 and 2010 will be very difficult for Mexico. The Mexican Congress recognizes 14 armed groups in the country. They aren’t going to be able to control this. It appears to me that the Mexican state is gradually beginning to panic.

JT: What do you make of Plan Mexico and the role of the U.S. government in offering to provide $500 million per year in aid to Mexican security forces?

EL: What the U.S. government is going to do is guarantee the investments of its businesses in Mexico.

JT: What should people here in the U.S. do to support the people of Chiapas?

EL: The point isn’t to come to people and tell them what they have to do. We think people know what to do in their own place, on their own terrain. Our role is to present the information we have documented about what is happening in the Zapatista communities.

JT: Why should people outside Chiapas care about the struggle of the Zapatista communities?

EL: We think that the Zapatista communities are presenting an alternative that we have not seen in Mexico or other countries. The people of these communities say, “We have had various governments. We have had senators and representatives from all parties and have seen what they have done. We’re going to have to construct this other alternative. No government above is going to construct anything for us.”

So, they began to construct their own autonomy, their own areas of health care, education, criminal justice, agrarian reform. It is something different. The people empowered themselves. What they wanted to do, they did.

For more articles on this topic:

Oaxaca on the Brink: Popular Rebellion Spreads in Southern Mexico

One more Martyr in a Dirty War