Testimony to War: Art from the Battlegrounds of Iraq
School of Visual Arts Museum
209 E. 23rd St., through March 8. Free.

Neither watching the war on TV, nor reading newspaper stories about it, achieves anything approximate to the works in the exhibit, Testimony to War: Art from the Battlegrounds of Iraq. 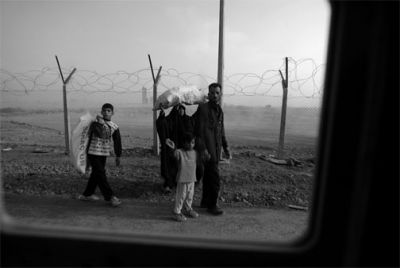 This presentation evokes a direct and immediate response from the viewer. It brings a rush of grim, sorrowful feelings; it thrusts the viewer into Iraq and produces a clear understanding of what is going on there.

The exhibit “is purposely apolitical, but is not neutral,” says Francis Di Tommaso, the Visual Arts Museum director. “The works take aim at indifference. They are meant to stir awareness, to provoke reflection.”

In this they are successful, because they pass the experience of war through the consciousness and consciences of individual artists. These are not historical, studio paintings of battle scenes as made by Tiepolo or Poussin, but closer to Goya’s Disasters of War.

Read is very accomplished. He presents, among other photo¬graphs, a sequence of a Marine assault Nov. 13, 2004, on “Hell House” in Fallujah. Read follows the Marines in. Marines go down. Insurgents lie dead. The house is finally blown to pieces.

Mumford shows Angel Flight, ink on paper, April 4, 2007, at the 28th Combat Support Hospital, Baghdad. “… As staff and sol¬diers stand at attention, the body is slowly driven past to the waiting helicopter, which will take it to Balad….”
Hughes came home to make a drawing for peace of a bird on a piece of barbed wire, shown in a video, at a traffic intersection in Champaign, Illinois. He posted a placard at the intersection as he drew:

I AM AN IRAQ
WAR VETERAN
I AM GUILTY
I AM ALONE
I AM DRAWING
FOR PEACE.

In another video, Hughes records the fate of 9-year-old Ahmed, blinded in an incident of war.

Buotte, now on the eve of a sec¬ond deployment to Iraq, tacks a map of Baghdad to the wall. Por¬traits of nine residents are posted. They are veiled by a black wool/polyester material reminiscent of the abya’a that devout Muslim women wear. The viewer lifts the veil to read their stories, then re-veils.

With an oblique reference to Jasper Johns’ targets and flags series, Roa’s Target of Critique, 2005, is derived from the U.S. flag patch worn on the right shoulder of each soldier’s uniform. The emblem is reproduced as a round magnet, two-and-a-half inches in diameter, copies of which viewers are invited to take and reflect on the lost life it represents.

An unsigned sculpture of four gray, standard-issue stretchers, upended on a board pedestal, stands in the center of the gallery.