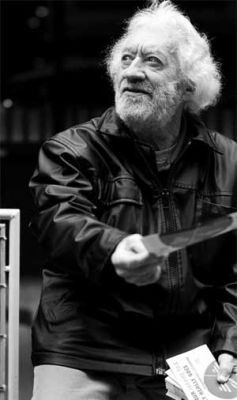 DiGia was “without pretensions” and “wore his radicalism in his life, not on his sleeve,” said his long-time WRL colleague David McReynolds.

DiGia’s activism took him through countless meetings, demonstrations and arrests, along with a stretch in federal prison, hunger strikes and a bicycle ride across Europe.

A lifetime of Activism

Born in the Bronx to a family of Italian immigrants in 1914, DiGia spent the WWII years in federal prisons as a secular conscientious objector, engaging in hunger strikes to integrate the prison dining halls. After the war, he and three fellow COs bicycled from Paris to Vienna, urging Cold War soldiers to lay down their arms.

In 1955 he joined the WRL staff as a bookkeeper. In 1964 he was arrested in Albany, Georgia, during a peace march and served four weeks in jail. In 1971, he was arrested in antiwar actions in Washington, D.C. In 1977, he protested nuclear power at Seabrook in New Hampshire, and in 1978 he was ar¬rested on the White House lawn, demanding nuclear disarmament. He was arrested for the last time at the mass protests against shooting of Guinean immigrant Amadou Diallo in 1999.

He worked at the WRL office through his 93rd birthday last December, although he had become a volunteer instead of a paid staffer in 1994. In 1996, he got a “Courage of Conscience” award from the Peace Abbey in Sherburne, MA, and in 2005, he and WRL colleague Karl Bissinger received WRL’s Peace Award.

This winter, after a fall and hip fracture, he developed pneumonia and died. He is survived by Karin DiGia, his wife of 37 years; their children, Howard, David, Brenda, Melissa and Daniel, his granddaughter Kyla, and his brothers, Robert and Mario.

Contributions in his memory may be made to the War Resisters League,
339 Lafayette St., New York, NY 10012.