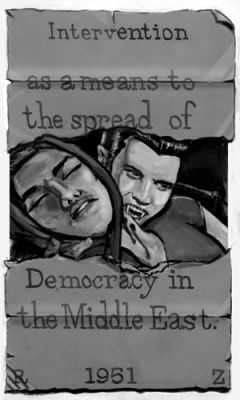 “I am saddened…to…acknowledge what everyone knows: the Iraq war is largely about oil,” announced former U.S. Federal Reserve Chairman Alan Greenspan in 2007. It has become fashionable to blame the war on oil, or on a handful of warmongering neo-conservatives in the Bush administration.

But the problem is far deeper than the quest for oil, or the desires of a few rogue politicians in Washington. The broader problem is that of imperialism, which is rooted in protecting “free markets” at whatever cost, and is justified under the false pretenses of spreading “freedom and democracy.” In this way, historian Staughton Lynd reminds us that the “United States” has been neoconservative since the Pequot massacre of 1636, where European settlers torched a Native American village, killing hundreds of people including women and children.

One crude example of colonial expansion from American history is the sordid tale of the forced removal and extermination of millions Native Americans in the last 500 years. And today, on the other side of the planet, the U.S. invasion of Iraq has led to the involuntary dispersal of some four million Iraqis from their homes — a twenty-first century Trail of Tears. A 2006 study by the British journal, Lancent, estimated 600,000 Iraqis had been killed since the March 2003 invasion. A British polling agency, Opinion Research Group, put the number at more than one million in 2007.

OUR RIGHT TO IRAQ

The Bush administration’s invasion of Iraq shares a marked continuity with its predecessors in launching invasions to preserve “free markets.” The difference today is that this administration is more brazen in its public declarations, from its insistence that it has a unilateral right to invade others, and will do so with “preemptive” force. Moreover, in November 2007, the U.S occupiers signed a Declaration of Principles with Iraq, which encouraged “the flow of foreign investments to Iraq, especially American investments.” Iraq’s latest, and hotly disputed, oil law is “overly generous” to “big oil companies,” Time magazine noted in January 2007. The Texas-based Hunt Oil signed a deal with the Kurds in 2007. Its CEO was appointed by President Bush to the Foreign Intelligence Advisory Board and was identified as a member of Halliburton’s board by the Associated Press.

All this comes on the heels of the former head of the Coalition Provisional Authority in Iraq Paul Bremer’s Order 39 in 2003 that privatized hundreds of Iraqi state run companies. Back in 1992 the Defense Planning Guidance, a document linked to Vice President Dick Cheney and former deputy secretary of defense and World Bank leader Paul Wolfowitz, suggested that the U.S. should “establish and protect a new world order,” including “access to vital raw materials, primarily Persian Gulf oil.”

It appears that the war’s planners knew in 1992 what occurred to Greenspan in 2007.

While the former Federal Reserve chairman focused only on oil, Cheney and the Pentagon planners emphasized the protection of new world order. Indeed, the issue is not petroleum alone. “The world knows that we are imperialists dedicated to controlling all the oil we can funnel into our bellies,” historian William Appleman Williams explained, but “oil is not the primary cause of empire.” The Iraq war is not simply about oil — it is about upholding the global capitalist order. This has been the U.S.’s mission for at least the past one hundred years.

Scholars can acknowledge that the U.S. behaved as an imperial behemoth when discussing interventions that are a century old. It hardly ruffles the feathers of the establishment to say that the 1898 Spanish-American War was waged on the false pretext that Spain blew up an American battleship, allowing the U.S. to replace Spain as the colonial ruler over Cuba and the Philippines. Even a standard textbook by Thomas Patterson attributes the war largely to a group of “imperialists” — Teddy Roosevelt, President McKinley and Senator Henry Cabot Lodge — who were “backed strongly by business leaders.” These “empire builders” promoted “racial superiority” and occupied the Philippines to gain access to the “rich China market” with an “expanding navy that protected American commerce.” Just as the problem today is not simply a few renegade neocons, the problem in 1898 was not simply a handful of aggressive “imperialists.”

Nor can we accept the excuse that imperial adventures promote prosperity at home or are in our national interest. In 1898, the conquest of foreign lands did little to help working conditions at home, from child labor to the widespread poverty. Today, it does little to help American workers beset by the affects of “outsourcing” — stagnating wages, predatory mortgages and foreclosures and rising gas prices while many corporations continue to amass record profits.

For those who continue to believe the Bush administration’s rhetoric that the Iraq was about fostering democracy, a simple glance at the legacy of U.S. foreign policy in the Middle East will clearly show that military and covert actions are too often rooted in facilitating American investment in the region.

If the U.S. was truly concerned about opposing undemocratic regimes, then it would have intervened in Kuwait ruled by the al-Sabah monarchy, just as it intervened in Iraq under Saddam. Or, perhaps the U.S. should have targeted the Islamist regime in Saudi Arabia with equal fervor as that of the Taliban in Afghanistan.

Pundits daily bemoan the Middle East’s lack of progress in building democracy, yet fail to acknowledge how previous U.S. meddling undermined the glimpses of democracy that were flaring up decades ago in the region. In 1949, the U.S. encouraged a military chief, Hunsai Zaim, to overthrow the existing government of Syria, setting the stage for a dictatorship. According to the historian Douglas Little, Ziam authorized a Western pipeline project, TAPLINE, after gaining power.

The well-known case of Iran is even more disturbing. In 1953, the U.S. overthrew democratically elected Mohammad Mossadegh in Iran, effectively ending the nation’s experiment with democracy. The U.S. instead supported dictator Shah Reza Pahlavi from 1953 to 1979. Mossadegh first caught the Brits attention when he nationalized Iran’s oil.

Western oil companies, such as Standard Oil, gained much from the U.S. coup in Iran. The companies received a hefty percentage of Iranian oil concessions, previously controlled by the British and seized by Mossadeq. Sullivan and Cromwell, a law firm that represented Standard Oil, once employed then Secretary of State John Foster Dulles, and his brother Allen, director of the CIA in the early 1950s. Similar observations hold for another company that shared in the new oil concessions, Gulf Oil. They hired Kermit Roosevelt, the mastermind behind the coup, who brokered deals directly with the Shah. He also allegedly received payments from an aerospace giant that sold hardware to Iran. Various commercial interests profited from their power to mold U.S. policy during the Shah’s 25 year reign.

Similar commercial interests are working to profit from the Iraq invasion today. Greenspan laments the latest war for petroleum but the invasion is more about “encouraging the flow of foreign investments to Iraq, especially American investments.” The global capitalist order plunges forward from 1898 to today.

Iraq war veteran Andrew Sapp sums up the issue well: “The system that led us into Iraq has not changed…We are beholden to late capitalist society; the voices of millions of people seem to matter less than a few CEOs.”

Carl Mirra, a former U.S. Marine and war resister, and is on the Steering Committee of Historians against the War. He is the author of United States Foreign Policy and the Prospects for Peace Education.