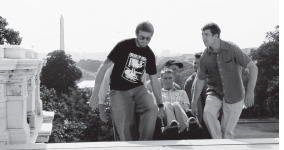 Meet Tomas Young — a disillusioned young veteran who comes home from Iraq condemned to a wheelchair for the rest of his life. His daily routine is filled with catheters, puke pans and a dizzying array of medications. At the same time, he’s ready to get married and to hold the politicians who betrayed him accountable.

Body of War introduces this freckle-faced Midwesterner in the summer of 2004, struggling to get dressed shortly before his wedding, and follows his life over the next two years.

With its focus on both Tomas’ quest for love and his emergence as an antiwar activist, Body of War brings to mind post-Vietnam films like Coming Home and Born on the Fourth of July. But while the documentary’s you-are-there intimacy provides fascinating glimpses into Young’s life, it can only skim the surface of Tomas’s suffering, which seems somehow more suited to a Hollywood psychological drama.

The film does unfurl a series of poignantly ironic moments: Tomas at Ground Zero contemplating the 9/11 attacks that inspired him to enlist, Tomas being jeered by pro-Bush hecklers at an antiwar rally (“If I could walk, I’d kick your ass!” he screams back), family members whose loved ones did not return from Iraq gravitating to Tomas to touch and hold him, Tomas commiserating with a similarly paralyzed Vietnam veteran over erectile dysfunction cures, Tomas watching from his wheelchair as his younger brother prepares to deploy to Iraq, Tomas watching President Bush joke about those missing WMDs at a dinner for Washington insiders. These juxtapositions give the film much of its force, carrying the story forward and bringing home the futility and sorrow of war.

The film is interspersed with sound bites from the October 2002 debate on whether to go to war, a parallel narrative that creates a sharp contrast with the agony of Tomas’ day-to-day existence and leads neatly to the cheesy but still moving final scene.

If you think the war is “over,” ask Tomas Young — or go watch this movie.

Body of War is scheduled for nationwide theatrical release in April.