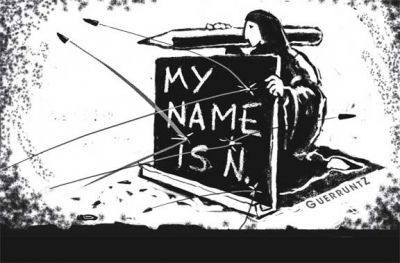 N., who asked us not to use her real name or photograph her, is a teacher in Baghdad. She was invited to the United States by 9/11 Families for Peaceful Tomorrows and 121 Contact, a website hosting dialogue between Iraqi and U.S. students that N. helped found in 2004. Since her arrival in Brooklyn seven months ago, she has been speaking across the United States about living and working through five years of war.

“When I arrived here the first month I cried a lot because there is no sign of war here,” N. told The Indypendent. “Every minute in Iraq is a war. Even when I walk in the street, I don’t raise my face. I’m always looking at the ground, I’m afraid a bullet will hit my eye or my ear or my head.”

JENNIFER KLINE: Explain what daily life has been like for you in Iraq.

N.: Everything is difficult. After the occupation the electricity is always down. Sometimes my neighborhood has one to two hours of electricity a day, but sometimes for a week there is no electricity. … If you come to my house you will see the bullets everywhere in the walls. … the majority of the schools are in bad shape. No water in the schools, no glass in the windows. … after 5 p.m. you are not allowed to walk on the street, ever. In the summer it is 6 p.m. to 6:30 p.m. You cannot move around in the dark. The police are afraid of any movement, so they just shoot. People don’t trust the police because many, many men infiltrated into the army or into the police. They are attacking people at night, killing, raping, stealing from people. I have to wait every day on the highway near my house for the school bus to take me to work. Each minute waiting on this highway is like one year of waiting. You don’t know when the shooting will start or if an American will shoot somebody or they will find an explosion. Sometimes snipers start shooting and there is nowhere to go.

I used to see a young man every day. He waited for his car. One day I was looking down the road for the school bus and the young man was standing right next to me and I hear two bullets and then people were running. I looked and I saw the young man lying on the ground and his fingers were moving. I wanted to help him but I was afraid. I knew the sniper will shoot me next to him.

I went back to my house running and crying and the other teachers on the school bus called me asking, “Hey, where are you? There is nobody on the street but this dead body.” I told them, “They killed him in front of me. I can’t come to school today.” The body lay there for six hours. No one can go to the dead body to help him. This happened every day. Sometimes women, sometimes children.

JK: So your school is still open?

N.: Sometimes I go to school to teach 35 students, and I will only find one or five students. Some of them are afraid to come to school. Sometimes the troops surround their neighborhood. Some have fled with their families; some were displaced from their houses. Sometimes in the school we did not teach the material we have to teach. We talked about our lives.

One of my students was hit by a Humvee by accident. Her bones were crushed, and after two weeks in the hospital she died. From my class, three students were shot and killed and one of them was kidnapped. As of this moment, no one knows anything about her.

In 2004 I started the peace bridge, 121 Contact, between the Iraqi and American students, and she was one of them. She was very talented. She left the school after the final examination two years ago and that was her last appearance to this moment.

JK: Were you afraid of speaking out in the United States?

N.: No, I tell the Americans every detail. And what surprised me about the Americans is that they do not know these details. After each speech I see them crying. The majority come and hug me and some of them give me money for the children in Iraq, for the orphans, for the widows. They ask me to deliver their message to Iraqis, that “we are with you, that we want to support you, that we feel ashamed of this war, that we have to do something, that we are responsible for your misery.”

This is a shock for me — that the people here are just like the Iraqis are when they are away from the government.

JK: How did you get a visa and get to the United States?

N.: It took 16 months … I went to the U.S. Embassy in Amman, Jordan, twice, because the U.S. Embassy in Iraq is in the Green Zone and this is a very dangerous trip. It took 13 hours, but you prefer to go to the furthest point than to move around in Baghdad. Sometimes we are in traffic among cars and I keep reciting prayers. I don’t want to die in an explosion and my family will find a leg or a hand or an eye.

JK: Are you planning on going back to Iraq soon?

N.: I have not decided yet. You know there is no life in Iraq. But I miss everything; the children, the school, the people … though when I walk in the streets here I believe I am in Iraq because the people are just like the Iraqis. They are simple, modest, nice and helpful. We are all humans after all. There is no hatred. There is no conflict. Just like Iraq before the occupation.

JK: What does your family say about day-today life right now in Iraq?

N.: I read the news and hear that there is some sort of decrease in the violence in Iraq… but when I call my family they say, “It’s the same.” The militias are still there in the streets and … I have many sisters and many brothers and each sister lives in another neighborhood in Baghdad, but it is difficult to move around and it’s dangerous to visit each other. … Now you cannot go to the hospital because it is too dangerous. There are many different kinds of militias that control the hospitals. They ask for your ID, and if you are against their interests or aims, you’ll be killed.

JK: Have any of your family or friends been kidnapped, killed or injured?

N.: Yes. My brother-in-law was kidnapped two years ago in Baghdad while he was driving his taxi home. But my brother-in-law has nothing to do with law or religion. He is a regular person. He was just kidnapped because he is from another sect. He is Shi’a…. He is a taxi driver and he has nothing to do with the situation, of course; he is the only breadwinner of his family. He has three children and my sister is a housewife. We bought this car for him because we want to help his family. He had no job after the occupation.

He used to work for a bathroom fixture company.

So when they kidnapped him, they put him in a basement with two young men. One of them was an interpreter for the Americans. They tied his hands to his back and blindfolded his eyes and they told him to kill somebody. He said, “I can’t do that. You can kill me but I can’t kill anyone.” The man next to him, the interpreter said, “I am ready to kill, but please release me, promise to release me.” They executed him at once. My brother-in-law predicted that he would be the next, but … the next day they released him. He was in the outskirts of Baghdad, near the airport. He walked about two hours and he told his story to the people he found and he called his wife and he got home.

JK: Do you have teacher friends who are thinking of leaving, or have already left, Iraq?

N.: I know many teachers who have left their jobs, and they live in Syria now, and Jordan.

JK: Has your family ever thought of leaving Iraq?

N.: They don’t have enough money. … They can’t. I wish they could, but they can’t. The majority of Iraqis are still in Iraq because they cannot afford good lives for their families in other countries. So, they have to face all different kinds of life deterioration. … Violence, no electricity, no clean water, no jobs and no security. They cannot afford to leave.