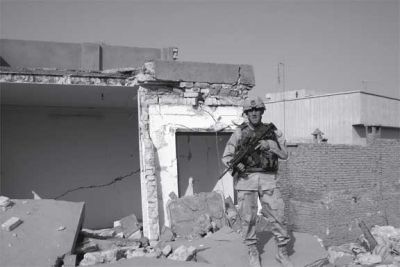 Logan Laituri joined the U.S. Army in February 2000, at the age of 18 and two months. “I signed my papers before I even graduated [high school],” said Laituri, who had met a military recruiter while attending an event with friends.

Originally from Tufton, California, he was trying to find a way to pay to attend his college of choice in Hawaii. “I wouldn’t have looked at [the military] twice if I didn’t need a way to pay for college.”

After volunteering to serve in Afghanistan after Sept. 11, 2001, Laituri was instead deployed to Iraq in January 2004 for a 13-month stint. Although he was initially supportive of the war, he said he began questioning after what he saw in Iraq. As part of a Quick Reaction Force unit of the mobile infantry, he visited nearly every major city in Iraq, including Kirkuk, Mosul, Samarra and Najaf. “The more and more we moved, the more damage we caused,” Laituri said. “I really began to wonder if this was really winning the hearts and minds [of the Iraqi people].”

In June 2006, when faced with a second deployment in Iraq, Laituri filed for conscientious-objector status. “I told my unit that I was very willing to return to Iraq. In fact, that was what I wanted to do. But, I wouldn’t take a weapon with me when I went. I didn’t want to be an instrument of intimidation and fear.” Now an active member of Iraq Veterans Against the War (IVAW), Laituri will take part in the IVAW’s Winter Soldier hearings by testifying on panels about the dehumanization of civilians and soldiers in Iraq. He will speak first hand about how U.S. military policies, such as the Rules of Engagement given to soldiers, have led to many atrocities committed in Iraq.

The Indypendent’s Erin Thompson talked to Laituri about his experience in Iraq.

Erin Thompson: Explain what the Rules of Engagement (ROE) are?

Logan Laituri: ROE is a system to define when you can and when you can’t [engage in fire]. In Samarra, [Operation Baton Rouge, October 2004] we had a very permissive ROE that allowed us to do as much as we needed to, basically. For example, in Samarra I was on top of a school, and we were told before we went in, “We’ve told the entire city that we’re coming on this day, at this hour, and they have to stay inside.” And so ROE were “open.” It was almost a free-fire area. And so when one of the snipers on top the roof sees a guy crossing the street with a grocery bag in his hand, he’s considered free game. Basically, he meets the criteria for ROE. What I remember being told was that everybody should know better than to leave their house in the next three to five days. If they have left their house, you should consider them a combatant. So, that’s why I say that the sniper was within ROE because the guy was outside his house, but the guy was also unarmed. I would question whether that is moral, or even necessary, to kill a man who doesn’t have a weapon, who’s crossing a street when we told him not to.

ET: You watched him get shot?

LL: Yeah, and the sniper has a scope so he probably had a better idea of what was going on, but I didn’t see anything, any kind of weapon fall from his hand or from his person. ET: It seems like you became sensitized to what you were doing as a U.S. soldier in Iraq, as opposed to desensitized. Talk about this.

LL: I think it was a really long process. … In basic training, we don’t shoot at people. We shoot at things that vaguely resemble humanoid kind of figures. And so we begin being introduced to this reality of actually shooting at something that could be a human. And then you take baby steps to that, until you finally, you actually do it. By that time you’ve already been exposed so much to all these kinds of lesser degrees of that, it’s almost like it isn’t happening. When we were in Iraq, when we talked about going to the States, we would call it the “real world” and we didn’t think much of it.

For me, it took eight or nine months after I got back from Iraq to digest this stuff. … I think what began [in Iraq] was a process of awakening and opening my eyes to what’s really going on.

For more information about Laituri and other resisting vets and full coverage of IVAW’s March 13-16 Winter Soldier hearings, visit indypendent.org.

Photo: Logan Laituri, IVAW Winter Soldier participant, standing on a demolished house in Samarrah, Iraq. A suspected insurgent stronghold, it had been “softened up” by being bombed. Photo courtesy of Logan Laituri.