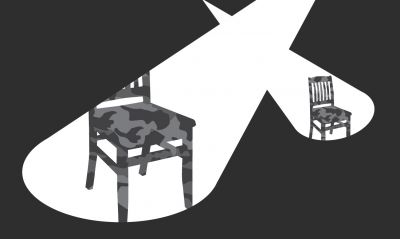 Of the various war-related media focusing on the experiences of U.S. soldiers in Iraq, few can offer the immediacy of Surrender, a largescale interactive theater piece workshopped this winter for an official run beginning July 4.

Produced by the International WOW Company in collaboration with Iraq War veteran and blogger-turned-author Jason Christopher Hartley, Surrender casts its audience as soldiers in a basic counterinsurgency scenario, complete with real fatigues, replica assault rifles, and a roomful of “Iraqi insurgents” to be detained.

Upon arriving at the theater, participants get fatigues and strict instructions on proper field dress code, down to the placement of nametags and the lacing of the boots. The audience is broken out into squads with a set hierarchy and then provided with fake M- 4 assault rifles, nearly as heavy as the real things. Hartley, on stage throughout, sharply walks everyone through an abbreviated boot camp that details the proper posture, walking speed and rifle handling for enemy engagement. A single mistake, like accidentally pointing your rifle at your fellow squad member, means push-ups (but not too many).

Once all participants have a rough idea of how to carry themselves like soldiers in the field, Hartley has each squad practice entering a potentially hostile location. Individual squad members learn how to move to a specific spot in the room, clear the corners and then properly search and detain any insurgents therein. Throughout, Hartley patiently describes the proper procedure in military lingo while barking commands to add pressure to the simulation. With squads rotating on and off the stage and the whole three-hour exercise open for questions, the audience enjoys an even back-andforth between spectatorship and participation.

In the brief Q&A afterwards, Hartley and writer/director Josh Fox discussed their desire for the project to provide a unique perspective on the war that few theater-goers will ever experience. The energy of the piece, the nature of the squad hierarchy and Hartley’s instructions, said Fox, provide a glimpse into a military mindset where fear and reflex complicate one’s reactions. Both Fox and Hartley expressed a desire to keep the project as politically neutral as possible, with a post-show response session letting everyone express objections or offer suggestions. Though the workshop version used chairs in a black-box theater as the room of insurgents, the full-scale Surrender is currently set to take place in a warehouse at the Brooklyn Navy Yard, with the audience bussed in from Manhattan.

More information is available at mapfund.org/grant_528.html.