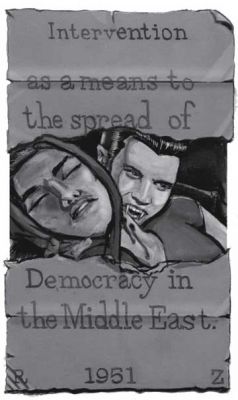 Despite copious grumbling on the left, the Bush administration has secured one impressive victory in Iraq: it will leave a raging war there (and another in Afghanistan) for the next administration.

Bush has imposed ironclad facts on the ground that will make it virtually impossible for a new president to simply withdraw the troops. The largest U.S. embassy in the world is in Baghdad, there are the “enduring” military bases across Iraq, and there’s the reality that his war has destabilized a strategic country in the center of the world’s major reserve of oil. Plus, by the time Bush vacates the White House next year, U.S. troop levels in Iraq will be higher than the baseline of 130,000 troops that has been maintained for most of the war.

Unless the U.S. Army breaks, a large force will remain in Iraq for years. The Republicans are committed to an unending Iraq war, there is an absent mass-based antiwar movement in the streets, and the Democrats are incapable of stopping it.

Bush’s victory is a domestic political victory above all. He has thwarted the will of the majority that sees the war as a mistake and wants rapid withdrawal, and he called the Democrats’ bluff that they would stop funding the war. This victory hinges on the decline in U.S. deaths. A year ago, more than 100 GIs were being killed in action every month. The drumbeat of three, five or even ten U.S. soldiers dying nearly every day kept Iraq at the top of the news. Now, with combat deaths averaging barely 25 a month, media interest has waned.

The decline in U.S. casualties stems from a divide-and-conquer strategy in Iraq that has split resistance almost every way possible: Shi’a vs. Sunni vs. the U.S. vs. Al Qaeda, along with myriad ethnic, religious and political fissures within these same groups.

The Iraqi resistance has not been defeated, but it is contained, and it’s possible that the United States could eventually exhaust it. By forming separate alliances with powerful Shi’a and Sunni forces, the U.S. military has been able to foment warfare between and within these two communities. The Pentagon has neutralized the main Shi’a resistance, the Mahdi Army, by assassinating and arresting hundreds of midlevel militia leaders. This led to high turnover, a breakdown in discipline and a loss of popular support. Its leader, Shi’a cleric Moqtada al-Sadr, declared a unilateral ceasefire last August after a vicious battle in Karbala between the Mahdi Army and its main Shi’a rival, the Badr Organization, left more than 300 dead and wounded. Badr, which works closely with the U.S. occupiers, has pressed this advantage to rout Al-Sadr’s forces from many cities in the Shi’a south. The Mahdi Army, which still has a large base in Baghdad, is trying to regroup, while Al-Sadr is studying to be an ayatollah, which would enhance his soft power as a religious leader and give his movement access to well-funded religious endowments.

The most capable resistance has been among Sunni Arabs. They amounted to 20 percent of the prewar population of 27 million. Of the well over two million Iraqis who have fled and the many more internally displaced, a disproportionate number are believed to be Sunni. The effect is most dramatic in Baghdad, a city that has reportedly gone from 65 Sunni to 75 percent Shiite.

Starting in 2004, the United States created Shi’a-based death squads, many of which were quickly filled with Badr militiamen, to target the resistance. Once integrated into the Iraqi military and police, the death squads went after Sunnis wholesale. While this drove Sunnis to seek protection from the resistance, it also meant they could not hope to fight three different wars: against the Shi’a, the United States and the Kurds.
The outbreak of civil war in 2006 solidified the mutual hatred between Sunni and Shi’a Arabs. In addition, according to journalist Patrick Cockburn, “The Sunni were being squeezed by the murderous killers of” Al Qaeda in Iraq, a homegrown insurgent group.

Pressured on all sides, the Sunnis accepted the Americans as the lesser of the evils. Cockburn recently interviewed a police colonel in Fallujah who runs the city but who was fighting the Americans before he was appointed to the job in late 2006. Referring to Shi’a institutions as “militia,” the colonel explained, “When we compared the Americans to the militia and Al Qaeda, we decided we should choose the Americans.” This is the impetus for the U.S.-allied Sunni “Awakening” (al-Sahwa) movement. The U.S. military pays an estimated 80,000 al-Sahwa fighters $300 a month, far above the average wage, and reportedly supplies them with weapons. Having backed both Kurdish and Shi’a militias, the Pentagon has now organized resistance fighters into Sunni militias to create a balance of communal terror. At the same time, Al Qaeda has killed many al-Sahwa leaders, indicating the fractures within the resistance.

Nonetheless, the fact that such a large movement appeared and tamped down the resistance so fast, surprising even the Pentagon, reveals there is a core of the Sunni resistance that is unified. They are reportedly using U.S. aid to regroup and retrain and to build up their power against Shi’a-dominated security forces. Even though many Awakening groups have threatened to restart the guerilla war if various demands are not met, it’s unclear if they have the stomach for a return to all-out war.

This leaves the United States in a position akin to “Syria’s status in Lebanon from 1976 to 2005,” Cockburn writes. It doesn’t control the factions, but it keeps them in check while preventing any sort of reconciliation. The stage is set for an open-ended occupation.

This victory is a pyrhic one, however. The $800 billion spent to date in Iraq and Afghanistan and on the war on terror is hobbling a weak U.S. economy. Because the United States has tried to destabilize both Iraq and Iran for nearly 20 years, it has prevented them from expanding their oil production, causing tight markets. Oil prices have quadrupled since the invasion; Americans now shell out an extra $300 billion a year for oil and gas, which is compounded by higher energy costs showing up in the price of food and consumer goods. There is also the geopolitical fallout. U.S. unilateralism is hastening the shift to a multipolar world, with the European Union and China as the rising powers. While it’s always better to have challengers to empire, China is no model for a progressive society, and the swell of xenophobia and Islamophobia in European countries shows they are not as enlightened as they believe.

The Bush doctrine of naked force abroad and a police state at home is being replicated at the regional level; it’s the way of second-tier powers like Russia and India (and Israel). The United States is spurring the nuclear arms race, and it’s now attempting to make outer space the new battleground. With great flows of human migration pouring out of the global turmoil, governments use the hi-tech police state to keep displaced populations in check while corporations profit from their misery.

The simmering wars, power plays and economic turbulence also add to the environmental ills ravaging the planet. Hypercapitalism is strip-mining the planet, from rivers and oceans to rainforests, farmland and the new arctic frontier. The refusal to shift from the hydrocarbon economy means more resource wars and more devastating global warming. This is the landscape as the Bush administration rides into the sunset. It has won its battle in Iraq, but the world will be paying the price for a long time.

Iraq Background: The U.S. hand behind the Shia-on-Shia warfare – January 2007