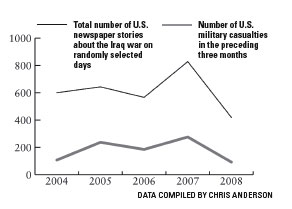 Think you’re hearing less about Iraq from the media these days? You are.

Even more disturbing, the amount of Iraq coverage appears to correspond to the number of U.S. soldiers killed during the previous the three-month period. For example, between December 2006 and February 2007, 276 soldiers were killed. This large number of troop deaths correlated to the higher frequency of news stories about the conflict. The decline in deaths this year has been matched by a decrease in the number of stories on the Iraq war. And casualty fluctuations between 2004 and 2006 are matched by changes in the amount of news coverage.

Both the U.S. press and the U.S. public seem to have come to a tacit agreement that 30 or so soldiers killed a month is an acceptable price to pay for allowing the Iraq war to continue indefinitely. As long as the Pentagon manages to limit casualty numbers, military contractors keep the army and reserves from imploding and the antiwar movement continues to sleepwalk, no end to the Iraq nightmare appears in sight.  The media cover Iraq when U.S. soldiers are killed. And when they are not being killed, the press seems to be doing its damnedest to forget that we are at war at all.