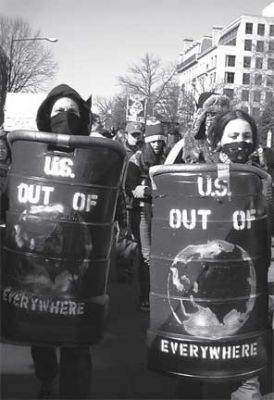 Students from more than 66 schools coast-to-coast will leave their classes to demand an immediate end to the war in Iraq between March 17 and March 21. From high schools to Harvard University, Students for a Democratic Society (SDS) is planning a diverse set of actions and events to protest the war on the fifth anniversary of the invasion. Many students plan to be go on strike from class to attend rallies and teach-ins, others will engage in local civil disobedience and some will hold candlelight vigils as the number of dead U.S. soldiers approaches 4,000.

Tamara Tal, an organizer with University of North Carolina-Chapel Hill SDS, said they are working with more than 30 student organizations, as well as campus workers and faculty, in order to build a broad antiwar coalition.

“We’re raising the stakes and bringing that message home to the university,” said Tal. “We want the university administration to cut their ties with military recruiters, war profiteers and Army research labs.”

Washington, D.C., SDS is joining United for Peace and Justice and a coalition of other antiwar organizations on March 19 for a day of civil disobedience that targets the corporations, politicians and media that profit from the wars in Iraq and Afghanistan.

“Just like last year, thousands of SDS youth are leading their communities in active opposition to the occupation of Iraq,” said Charla Schlueter, an SDS organizer from North Carolina. “As the fastest-growing student-led organization in America, SDS’s youth leaders are one of the loudest voices demanding all U.S. troops out of Iraq — today!”

Photo: Battle at the Capitol: Students for a Democratic Society (SDS) take on U.S. Imperalism in Washington, D.C. , Jan. 2008. dc.indymedia.org