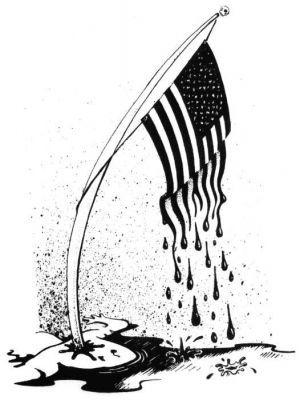 For five years, the American people have witnessed enough horror to fuel any antiwar movement. We saw the leveling of Fallujah by U.S. forces twice in 2004. From Abu Ghraib we were provided photographic evidence of systematic torture of detainees at the hands of U.S. forces. We have read daily reports of massacres, bombings and executions at the hands of death squads. We have seen civil war break out in Iraq. Americans cheered on the infusion of 30,000 more U.S. troops into Iraq, while ignoring how the presence of 150,000 U.S. soldiers and 180,000 mercenaries have traumatized the population that has survived.

Nearly 4,000 U.S. soldiers have lost their lives and tens of thousands have been injured and psychologically damaged.

And still the war continues. At our best, a small number of us have stood behind barricades, even more occasionally broken them down, lobbied our politicians or marched peacefully in circles in cities across the country. At our worst, we have forgotten that on the other side of the planet, an imperial agenda to control natural resources has destroyed a sovereign nation.

We have paid for the war with billions of our tax dollars, while the economy grows increasingly dependent on industries based on war, prisons and surveillance. Americans reelected the president who started the war; then we blindly supported the party that said they would stop the war during congressional elections in 2006, but which has voted to fund it at every turn since. Currently, the national debate centers around trying to choose between a Republican presidential candidate who has promised to fight the war in perpetuity and two Democratic candidates who promise to, perhaps, reduce troop levels in Iraq by the middle of the next decade.

Five years after millions around the world protested the war Feb. 15, 2003 — and were ignored — we should no longer shocked by the willingness of the government, media and corporations to continue to support the ongoing wars in Iraq and Afghanistan.

But, we should be outraged that five years later — with the reality of more than a million dead Iraqis, 4.2 million refugees, and veritable cottage industry of leftist media devoted to the disastrous nature of the wars in Iraq, Afghanistan and elsewhere — we, as a nation, have not yet moved beyond an adolescent and naïve belief that by simply stating our opposition, organizing occasional antiwar marches or rallies — or, better yet, by voting for Democratic candidates — we will end the war.

This is our war. We allowed it to start; we let it continue. We benefit from a system that destroys nations in pursuit of profit, and which is responsible for massive environmental destruction and genocide.

While there are many people currently protesting the war in a variety of ways — it is not enough. We cannot let ourselves be prevented — by the forces of a powerful government and disinterested population, by cynicism or by complacency — from stopping the war. Of course, we will be prevented from meaningfully protesting it. But, that doesn’t mean we can’t stop it. We must stop it. We have to find a way.

This special issue is The Indypendent’s attempt to remind people, and ourselves, of that fact.