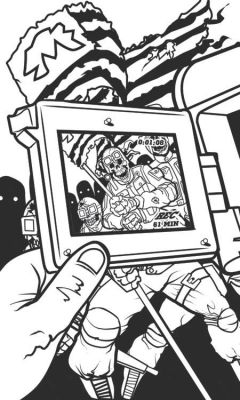 War has always supplied lazy filmmakers with an easy source of story material. Last year, Hollywood avidly capitalized on the Iraq War by releasing a slew of movies (Grace Is Gone, In the Valley of Elah, The Kingdom, Lions for Lambs, Rendition) that mined the ongoing bloodshed in the Middle East for its most photogenic angles and indulgent guilt trips.

Amid such dross, Brian DePalma’s Redacted emerged as only the second fiction film to date — the first being Homecoming in 2005, directed by Joe Dante and part of Showtime’s Masters of Horror series — that zones in on the impact of the war with unshakably principled vision. Neither amounts to an especially great film, but seasoned mavericks Dante and DePalma prove intelligent in their modesty, choosing to depict the Iraq crisis first and foremost as a crisis of representation.

Both tap into their oeuvres’ success formulas — the blend of horror and satire for Dante, the dynamics of surveillance and voyeurism for DePalma — to shape the narrative strategies of Homecoming and Redacted, but they divest the films of any metaphorical resonance.

Homecoming has the U.S. soldiers killed in Iraq come back as zombies and vote down the government that used false pretenses to send them into harm’s way, but the supernatural trope of living death has no meaning: the zombies don’t “stand for” anything and their resurrection provokes little wonder or revulsion in the other characters. Likewise, all we see and hear in Redacted is mediated discourse (a U.S. private’s video journal, a solemn documentary with French voiceover, video blogs, U.S. and Iraqi news reports, security camera footage), yet this entails no commentary on the media and conveys no significance beyond its obvious distancing effect.

Dante’s zombie narrative and DePalma’s meta-narrative do not function as allegory, meaning they elicit no paranoid belief in a controlling intelligence that eludes us (“the agency of these zombie vets must fit into a bigger scheme of things…”; “these audiovisual registers must converge in the design of a mastermind…”). Some 30 years ago, Dante and DePalma brilliantly wielded the force and exposed the trappings of paranoia as a potent socio-cultural and political imaginary in films like The Howling (Dante, 1981) and Blow Out (DePalma, 1981). The truth of the lie has long since given way to the powers of the false (as the great French critic Serge Daney predicted), and responsible filmmakers know better than to defy the arrogance of the current administration with a cinematic charge of secrets and lies. To wit, the leading characters’ guilty secrets in Homecoming and Redacted are set up as prone to pivotal exposure and resolution, yet the relevance of their impact is completely disavowed.

On a talkshow, Homecoming hero and Republican political consultant David Murch (Jon Tenney) fondly invokes the memory of his dead brother Phil (Ryan McDonnell), who served in Vietnam, to defuse a mother’s indignation over her son’s death in Iraq. This moment of pathos pays dividends in the polls, but is upended when sub-but is upended when sub jective flashbacks reveal how, after his brother came home from the war, Murch accidentally shot and killed him. Toward the denouement, Murch’s allegiance shifts, and when he confronts Phil’s militant zombie self, their traumatic kinship seems geared to generate some sort of redemptive catharsis. Instead it halts to a rousing non sequitur as Phil breaks his brother’s neck so Murch too can join the ranks of the undead. Dante dissociates this fratricide from the oedipal return of the repressed, redolent of the horror genre’s investment in bourgeois family crisis, and reinscribes it toward the vindication of social revolt by a bigger (if slightly decomposed) band of brothers.

Shouldering the burden of guilt in Redacted is Lawyer McCoy (Rob Devaney), a U.S. corporal in Iraq who stands by while two privates (Daniel Stewart Sherman and Patrick Carroll) rape a 14-year-old Iraqi girl (Zahra Zubaidi) and then murder her and her family. Under threat from the two men, McCoy initially keeps mum, but his conscience gets the better of him and he denounces them to the military authorities. A juxtaposition of conflicting testimonies ensues, but no verdict against the culprits transpires. Back in civilian life, when McCoy is asked to tell a war story in a bar, he breaks down crying in front of his wife and friends and divulges the memory haunting him. Amazingly, the assembled crowd’s ritual of hero worship continues as if his confession and the victimization of the Iraqi girl made no difference. Rather than set the scene for forgiveness, let alone justice, to be meted out, DePalma opens up a space for mourning, only to demonstrate that there is no homecoming for the mourning soldier, and that this lack entails a moral failure. The revelation and outburst of tears on McCoy’s part suffice, while a collective reality check triggered by his experience is preempted: This is Iraq seen through the prism of daytime emo-TV’s pathological exhibitionism — a desert storm turned mirage.

The alternative? DePalma has stated that his film operates with the agenda of bringing untold, possibly suppressed, censored or redacted war stories to the attention of the public — an almost journalistic pledge of engagement on the filmmaker’s part.

(Redacted draws on the rape and murder of a 14-year-old Iraqi girl named Abeer Qassim Hamza al-Janabi by five American soldiers in March 2006. Thus far three of the men, who also killed some of the girl’s family members, have been given 90-to-110-year jail sentences in military court.) This doesn’t account for the stylization of Redacted, though, which suggests a double remove from the images on the screen. We’re not being told, we’re being retold, because history repeats itself. Redacted — the abovementioned facts that inspired it notwithstanding — recycles the rape and killing of a Vietnamese girl by U.S. soldiers from De-Palma’s own Casualties of War (1989) for the Mumblecore generation, and Homecoming revamps the return home of an undead young private killed in Vietnam from Bob Clark’s Deathdream (1974) to blatantly political effect.

The Iraq-related films harbor no nostalgia for the Vietnam era, nor do they imply that the current invasive U.S. presence in Iraq replicates the Vietnam debacle. Their pedagogy, rooted in the wisdom of a couple of 60-something-yearold movie brats, involves history as a storytelling loop that repeats and differentiates — lest we fail to draw lessons from the past. Though very heavy on irony, Homecoming and Redacted have a strange directness, an almost raw quality coextensive with their literal meaning. Critics of Redacted have faulted its writer-director for tackling an important, complex subject with a film they deem simplistically conceived, clumsily executed, patronizing and transparent in purpose — a spitting image of the U.S. policy toward Iraq, in other words. Only an astute if wrongheaded few have equated DePalma’s deliberately selfsabotaging project with “war porn,” and the oddly detached realism and staged feel of Redacted fit that bill, as do the earnestly hysterical sensibility and clichéd aptitude of Homecoming.

Both works bear out French critic Serge Daney’s notion that if war could in the recent past still be thought of as merely obscene, it has by now become totally pornographic, and therein lies the challenge for the 21st-century war movie. Like porn, these films defy us to laugh at them while working up to a climax, then deny us that happy ending with brutal honesty. When seeing the stills of (real) Iraqi civilians killed in the war at the end of Redacted, I remembered the Dziga Vertov Group’s Ici et ailleurs (1976) and waited for DePalma to facetiously wonder, like Jean-Luc Godard before pictures of the 1970 “Black September” Amman massacres, how well these extras had been paid. The black bars used against his wishes by Magnolia, the film’s distributor, to hide the identity of the photographed victims, reveal that such creative liberties are in short supply nowadays. Redacted, after all.

Documentaries about the War

The first film made about Iraq after the fall of the Ba’ath regime.

Voices of Iraq by the people of Iraq Booya Studios and Voices of Freedom LLC, 2004

Iraqis speak their feelings about Saddam Hussein, the U.S. invasion and the future of their nation.

War Feels Like War by Esteban Uyarra In Focus Productions, 2004

The Road to Guantanamo by Mat Whitecross and Michael Winterbottom Film 4, 2006

A docu-drama about the Tipton Three, a trio of British Muslims who were held in Guantanamo Bay for two years.

Three weeks on the front lines of the simmering insurgency in Iraq.

Control Room
by Jehane Noujaim / Noujaim Films, 2004
A window into the international perception of the Iraq War, courtesy of Al Jazeera, the Arab world’s most popular news outlet.