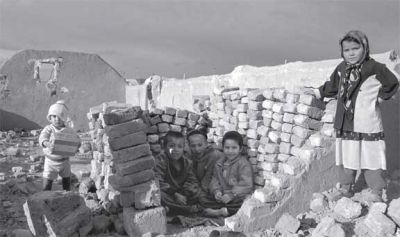 UNITED NATIONS, N.Y.—The total number of global conflicts in 2006 rose to 56, as compared to 30 conflicts ten years earlier, a 2007 review of The Impact of Armed Conflict on Children reported.

Conflict appears to be affecting children more brutally than ever. “They are no longer just caught in the crossfire,” said Ann M. Veneman, the executive director of U.N. Children’s Fund (UNICEF) who published the report and submitted it to the U.N. General Assembly Oct. 17. “They are increasingly the intended targets of violence, abuse and exploitation.”

The statistics on children and armed conflict are disturbing. In 2006, more than 18 million children were affected by displacement — both with and without their families. At least 50 percent of the world’s out-of-school children of primary school age are living in conflict-ridden countries. Reports over the past decade have often cited an estimate of 250,000 children associated with armed forces or armed groups.

The report also included the voices of the victims in their own words, gathered through a survey of more than 1,700 children and young people in 92 countries online and in group discussions.

“For many of us, war came to our towns and villages before we knew what was happening. … We were forced to flee so suddenly that we became separated from our families … sometimes forever,” says one child.

“We are always afraid because we know that we are not safe,” declares another.

“We believe that the greed and selfishness of political leaders are the cause of war everywhere … leaders … so greedy for power … that they do not think about us in making their decisions,” said a youth with poignant conviction.

The young people who responded to the survey said they wanted to be free from violence, wanted to learn, wanted to be healthy, wanted jobs and a means to survival.

On Feb. 12, 2008, the U.N. Security Council, in a presidential statement, emphasized “the need to adopt a broad strategy of conflict prevention, which addresses the root causes of armed conflict … in order to enhance the protection of children.”

The vast majority of those killed or maimed in armed conflicts are civilians, particularly children, the council said. However, no accurate figures exist for civilian casualties in global conflicts.

A report on children and armed conflict by U.N. Secretary-General Ban Ki-moon released Dec. 21 considered the recruitment of children by armed groups, attacks on school children, rape and other sexual violence, abductions, and the denial of aid to children across 19 countries.

Recruitment of children and internal displacement, as in Colombia, are closely linked, the report said. Too often displacement becomes the only avenue left for families to keep their children from being recruited by armed groups.

On the other hand, refugee and internally displaced person camps are often prime recruiting grounds for child soldiers, owing to the concentration of vulnerable children.

“Increasingly,” the report said, “we are encountering cases of children being detained for alleged association with armed groups, for example, in Burundi, Colombia, the DRC, Iraq, Israel and the Philippines.

“Many of the detained children are subjected to ill treatment, torture, forceful interrogation and deprivation of food and education,” noted the report.

A recent cooperative study by Iraqi and U.S. public health researchers noted that from March 2003 to June 2006, approximately 655,000 more Iraqi people had died than would be expected in a non-conflict situation. This report, which was published in Oct. 21, 2006, noted that about 601,000 of the reported excess deaths had violent causes.

In September 2007, a British polling firm, Opinion Research Business, estimated that 1.2 million Iraqis had been killed since the U.S.-led invasion in 2003.

“The prevailing security situation makes obtaining information on violations against children increasingly difficult,” said Secretary-General Ban. “Most of the available information is extracted from a wide range of different sources but can rarely be sufficiently verified. It remains clear, however, that Iraqi children suffer most in the ongoing violence.”

Ban recommended that the Security Council give equal weight to all categories of grave violations, that all future peacekeeping missions include child protection advisers, and that U.N. member states take action to bring to justice individuals responsible for these crimes against children.

Photo: Afghan refugee children pose for a photo in the Torbat-e-Jam refugee camp, located in Iran, approximately 45 miles from the border with Afghanistan, in 2002.
PHOTO: UNITED NATIONS/ESKINDER DEBEBE