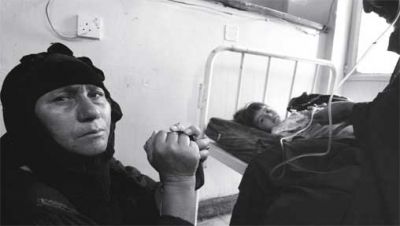 March 8 marked the 99th annual celebration of International Women’s Day, a day to commemorate the political, social and economic struggles and achievements of women globally.

This year we should use the holiday to observe and reflect on the suffering of Iraqi women, who have become invisible “collateral damage” in our country’s war in this now defenseless Middle Eastern nation. A good place to start would be by picking up Haifa Zangana’s book, City of Widows: An Iraqi Woman’s Account of War and Resistance. Zangana is an Iraqi journalist and activist who was a prisoner of Saddam Hussein’s regime. She dedicated her book to Abeer Qassim Hamza al-Janabi.

Al-Janabi was a 14-year-old Iraqi girl who was gang-raped and set on fire by five U.S. soldiers in March 2006 (her family was murdered as well). This is just one extreme case. But while this horrifying crime received some attention in the media (though not nearly enough: think JonBenet Ramsey), countless others have gone uncovered. Zangana points out in her book that there have been 1,053 documented cases of rape committed by occupation forces, militias and police between 2003 and 2007.

Zangana also puts into perspective the number of Iraqi civilian deaths, which some estimates suggest exceeds one million people. She cites a 2006 report that more than 90 women become widows each day.

“Since men are the main target of U.S.- led troops, militias and death squads … it is women who have come to bury the dead. Baghdad has become a city of bereaved women,” writes Zangana.

Women are also bearing the brunt of the ongoing refugee crisis. According to a Jan. 27 Iraqi Red Crescent report entitled The Internally Displaced People in Iraq, there are more than two million internally displaced people (refugees); women and children under the age of 12 compose roughly 82 percent of this staggering number.

But I would be doing Iraqi women and Zangana’s City of Widows a disservice by focusing solely on suffering and their role as victims. Despite the web of destruction, violence and repression Iraqi women face on a daily basis, they engage in acts of courage and empowerment in the face of tremendous hardship.

Iraq has a rich history of women’s activism through arts, literature, politics and revolution. This can help explain why Iraq, while under the tyrannical rule of Saddam Hussein, was still one of the most progressive countries in the Middle East regarding women’s rights. In fact, UNICEF reported in 1993, “Rarely do women in the Arab world enjoy as much power and support as they do in Iraq.”

But sadly, Zangana points out things have gotten worse, not better, since the “liberation” and during the current occupation — despite claims by the Bush administration that the emancipation of Iraqi women was yet another justification for this war.

“In reality, Iraq now has U.S.-sponsored medieval sectarian militias who have barbaric ideas about women’s role in society,” writes Zangana.

Hana Ibrahim is an example that Zangana highlights. She has been an “independent leftwing activist” since the 1970s and was editor of the weekly newsletter Gender, which covered problems Iraqi women faced at home and in the workplace. In 2002, Ibrahim founded the organization Iraqi Women’s Will (IWW), which began as a women’s cultural center in Baghdad that hosted events such as art exhibits and poetry readings. But after the invasion in 2003, IWW was kicked out of its space by armed Iraqis, claiming to be from Ahmed Chalabi’s party. The space was then reclaimed by the U.S. occupation government, which gave it to the U.S.-funded non-profit organization Women for Women International.

But Ibrahim would not be deterred. The organization continues to run, though its focus has shifted to ending the occupation and working to improve the political, social and economic rights of Iraqi women.

But any Iraqi woman could be used as an example. Just getting out of bed, taking care of herself and her family and living in a country with a wrecked medical system, where electricity is available for only a few hours a day, where clean water is inaccessible for more than 70 percent of the population and where armed militias and mercenaries run rampant is a heroic act.

Pointing out the hardships Iraqi women face is not an indictment of this war in Iraq — it is an indictment of war period. Each of us needs to ask ourselves, what is the responsibility we bear as citizens of the country that has executed this war?

Ignorance is not an excuse, and apathy is acquiescence.

Cyril Mychalejko is an independent journalist and an editor with UpsideDownWorld.org, an online magazine covering politics and activism in Latin America.

Photo: A woman sits by the bedside of her daughter Baghdad’s Khadasiya Hospital June 10, 2003. BY ANDREW STERN, ANDREWSTERN.NET