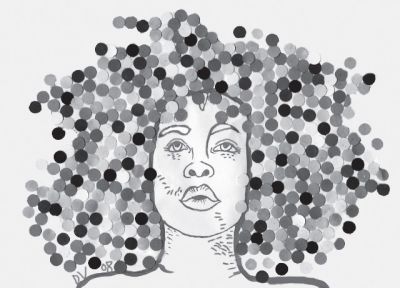 Judging from the album cover art of Erykah Badu’s latest effort, New Amerykah, (Pt. 1): 4th World War, the woman’s got a lot on her mind. Each lock of her ’fro is illustrated by symbols of present-day American avarice (guns, handcuffs, dollar signs), which are all anchored by an ankh — the Egyptian hieroglyphic for life — that has itself become a trademark for the Dallas-born singer who often calls herself “The Analog Girl In A Digital World.” The cover, like the sound and lyrics of New Amerykah, is both retro and avant-garde, reminiscent of George Clinton’s Funkadelic era while breaking the mold of what seems commercially possible today for a Black artist signed to a major label.

The first track, “Amerykahn Promise,” winks backward and gazes forward at the same time. Adding new lyrics to a Roy Ayers horn-heavy funk track from the 1970s, Badu uses her campy sense of humor to critique the American Dream, consumerism, patriotism and violence — “Promise to you, baby/I love you tooth for tooth and eye for eye,” she sings. The next several tracks take a decisive turn toward hip-hop, weighing in more heavily on the side of beats and electronic a r r a n g eme n t s than on live instruments. Many of these tracks showcase Badu’s col laborat ions with hip-hop unde rg round’s finest producers, including Madlib, 9th Wonder, Mike “Chav” Chavarria and Shafiq Husayn (of Sa-Ra Creative Partners). The latter half of the album serves up her more familiar soulful side, but is no less effective.

Badu not only pushes the boundaries of soul and hip-hop in this release, but she also produces her most directly political records of the last 12 years. On the up-tempo, east-coast style hip-hop track “Soldier, ” she sings, “to my folks in Iraqi fields/this ain’t no time to kill…to my folks on the picket line/don’t stop till you change they mind…”

Politically, anyone familiar with the Five Percent Nation will recognize Badu’s perspective on New Amerykah. Originally an offshoot of excommunicated members of the Nation of Islam in the 1960s, the movement has influenced a host of other hip-hop artists including Brand Nubian, GangStarr and Wu-Tang Clan. When Badu and guest artist Bilal cry on the track “Master Teachers,” “What if there was no niggas, only master teachers?” we hear the echoes of the teachings of Five Percenters, also known as “The Nation of Gods and Earths.”

But whether or not you understand or agree with New Amerykah’s political messages, they constitute a very bold move artistically for an artist of her stature. Unlike other Black women artists (like Joi, Imani Coppola and Me’shell Ndegeocello) whose music doesn’t easily fit into what’s considered “radio-friendly,” Badu has succeeded in using her label, Motown/Universal, to make really rich and challenging music with major label backing.

Although Badu may not complete her stated mission to heal hip-hop totally, New Amerykah may certainly rescue popular Black music from the abyss of banality where much of it currently resides.