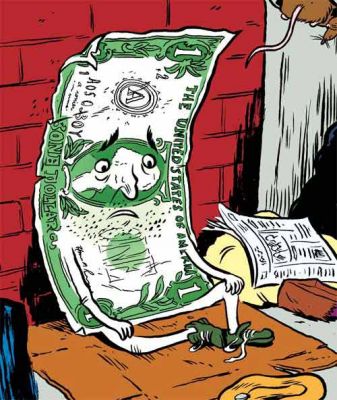 For months, government officials have been trying to reassure the public that economic troubles would be small and restricted to select areas of housing and credit. The spread of pain has proved this forecast false. Housing remains the driver of a storm whose gale-force economic and credit winds are knocking down jobs, profits, confidence and spending.
Wall Street has been sliding since the fall with stock prices off by more than 10 percent.

Pain has been concentrated in financial firms, mortgage lenders and those who hold bundles of consumer debt. Losses have been massive and destabilizing. Banks, mortgage lenders and investment houses have lost hundreds of billions of dollars and small financial firms are falling or being swallowed up. Pools of wealth, public and private, foreign and domestic, stalk
the storm ravaged landscape in search of deals. The retirements and living standards of Americans hang in the balance.

As recession sets in government officials, business, workers and consumers report and witness signs of pain. Between January and March the United States lost 232,000 jobs. Home prices are falling quickly. The loss experienced in millions of households is staggering. At least 10 percent of people in in the United States now live in homes that are under water — that means more than 10 million households owe more on their homes than they are worth.

This time it is not the toxic tide of Hurricane Katrina. High mortgage debt waters and low prices are drowning the lower middle class. Washington has been slow to help those unable to evacuate. Help has arrived for select investors, dominant banks and businesses positioned to influence the decisions.

Millions of American families are left waiting for help as a toxic debt tide threatens to drown them. Foreclosed homes, defaults and lawsuits are piling up and the broken protective levees continue to pour water. The firms who lent are also suffering, but they are receiving real help from the United States’ central banker and financial regulator, the Federal Reserve (Fed).

Part of the Fed’s role as monetary authority is to ensure the private banking system continues to serve its role in the economy. Whatever you think of the banking system, our economy depends on it. The financial resources of the Fed — the money it prints and uses to buy treasury securities or loan to banks — should not be thought of as public funds, but instead
as a tool to influence economic outcomes.

Cutting the Discount and Federal Funds Rates makes more and cheaper cash available to those financial institutions pained by the size and poor performance of the loans they have already made, bought and sold. The Discount Rate has been lowered seven times from 6.25 percent to 2.5 percent. Since August 2007, the FederalFunds Rate has fallen from 5.25 percent to about 3 percent. This has been done alongside massively enhanced access to large sums of money.

The second form of help to banks, investment and commercial/retail banks, has come in the form of regulatory change. New forms of inexpensive and massive access to loans have been introduced since the credit crisis began last summer. The Fed tried to convince everyone that all was well for several months. This failed dramatically and quickly.

In response, over the last six months, the Fed has made large changes to our financial system, each change providing a greater level of assistance to increasingly distressed leading financial firms. This is exactly the kind of help that has not
been given to U.S. families.

The Fed’s New Term Auction Facility (TAF) has allowed large banks to borrow cash by putting up collateral in the form of bonds made of bundled loans that can’t be sold for close to face value. Banks are allowed to drop-off loan bundles for cash or government securities at their local Federal Reserve Bank. About $260 billion was loaned through the TAF to large banks in twice-monthly auctions since December 2007. What is new about this massive lending to banks is that repayment is due in 28 days, instead of overnight.

As conditions worsened leading to the Bear Stearns takeout and investment bank bail-in March 16, 2008, when further assistance was delivered by the Fed. On March 11, the Fed began allowing select financial firms access to massive 28 day loans of safe U.S. government debt in exchange for much less safe bundled loans.

As of April 3, $100 billion had been borrowed. Investment banks have now been invited to join those borrowing large sums at the discount window. Current outstanding loans of cash and Treasuries by the Fed total over $320 billion.

All of the above is to say, some have received large sums of help — nearing the half-trillion dollar level. Most households have gotten no direct help and the pain keeps pouring through regulatory levees and market transactions.

House prices and debt repayment stresses are the central issues. The Fed calculates how much after-tax income households spend on paying debt — this number is reported as the debt service ratio. The most recent number, from the end of 2007, shows that 14.32 percent of after-tax income is going to debt service. Thus, the storm waters are rising.

The economy is not helping folks, it is actively hurting. Unemployment and prices are rising and the majority is not being thrown any lifeline. The Fed’s actions to help banks and lower interest rates are flooding the economy with dollars.

This has been pushing down the value of the U.S. dollar. We can see the process in our everyday lives in two ways. If we travel abroad or buy imported goods, we pay more. Our money is worth less and more of it is required to purchase goods and services, foreign and domestic. The decline in the value of our money is increasingly showing up at home as inflation, a general increase in prices. Stuff costs us more just as our houses lose value and interest payments take a deeper bite out of stretched incomes.

The early months of a recession are always difficult. As time passes and pain intensifies, fighting begins over who gets help, how much help and when. So far the help offered to the public has been little and lagging. As debates have raged about how much help is needed, the best connected and positioned firms have been demanding and getting generous sums.

The “merger” of Bear Stearns and JP Morgan is a case in point. In a deal worked out with the Treasury Department and the New York Fed, the larger and better positioned JP – Morgan gets a $29 billion loan, while $30 billion worth of Bear’s distressed portfolio is put up as collateral for the loan. The bigger and stronger help themselves to the smaller and weaker with generous government assistance.

More, or at least some, targeted assistance to America’s families is required. Artificially keeping house prices up is neither wise, nor possible. House prices need to continue to fall and will. This will place increasing pressure on household balance sheets. To begin to address this situation, we need to concentrate on elevating earnings and reducing debt levels. This will require the kind of creativity and expense reserved for banks so far.

The moment is ideal to extend healthcare to all U.S. families. This is overdue, and will increase our ability to compete in the global economy and help reduce household costs.

We need a massive infrastructure investment program, on the order of $1.5 trillion. This is required to keep us safe and efficient and has been put off for far too long. This increases our competitiveness, safety and future earnings. In the mean time, it creates jobs and earnings.

If the value of home mortgages has fallen far enough and low enough to cause massive pain to financial institutions we should begin to explore government-assisted programs to sell U.S. families their own mortgages back at the new discounted price. Why only sell the new reduced value mortgages to investors while households struggle and fail? This will be difficult and dangerous. What we are doing now is also difficult and dangerous. The losses will have to be carefully
monitored and shared. That is, however, already baked into the recession cake.

It is important to openly discuss and debate various solutions and market interventions. It is time the public got a seat at the table. All the involved parties must have access and influence in this social decision-making.

J.R. Borenstein contributed to this article. For more information see:

Inflation Nation a Guide to Your Pocketbook Blues