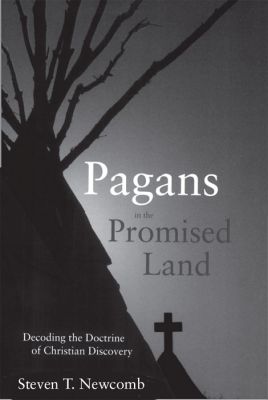 A review of Pagans in the Promised Land: Decoding the Doctrine of Christian Discovery by Steven T. Newcomb, Fulcrumb Publishing, 2oo8.

In a well-argued book, Shawnee/Lenape scholar and author Steven T. Newcomb outlines how the doctrine of Christian discovery and dominion was used by European monarchs and colonists, and eventually the U.S. courts, to justify the taking of Native American land, through both physical and psychological warfare, and to refuse to grant complete Indian sovereignty today.

Pagans in the Promised Land shines an informative light into understanding the conscious — and unconscious — founding principles of “the United States of America” empire.

Explaining American colonial history through cognitive theory, Newcomb reminds us that all laws and borders are a manifestation of one’s imagination, that what we deem to be literally or objectively
true is really only metaphorically true from a specific perspective. For example, that Europeans “discovered” North America is only metaphorically true from the European perspective at the time, not from the perspective of the millions of Native peoples who had been living on the continent for thousands of years.

The thrust of his book involves a careful analysis of the infamous 1832 U.S. Supreme Court ruling of Johnson v. M’Intosh, in which the high court ruled that Native Americans did not have ownership rights to their ancestral lands (only a title of “occupancy” on U.S.-owned land) and thus could not sell parcels to private citizens. The court opinion detailed this rationale in its “Discovery Doctrine,” the principle that claims the U.S. government had fairly acquired land from the European Christian colonial immigrants who had previously “discovered” and made claim to the land (“dominion”) based on their belief that God wanted “barbarous nations” to be overthrown and to become subservient to the “Cross and Crown.”

What Newcomb highlights about the case is remarkable — that the fundamental principles of U.S. property law and federal Indian policy are actually in violation of the separation of church and state.

Through detailed analysis of the court’s opinion, Newcomb shows that this imperial right to “dominion” has roots in the Old Testament, in which God selected Abram to lead the chosen people to the promised land. Newcomb writes, the “Lord of the Bible gave Abram and his people the right to take possession of the land of Canaan, despite the fact that indigenous people [Canaanites] were already
living there” (Genesis 1:28). From a Christian perspective, this was the premise that justified the divine “right of possession or dominion” of the “chosen people” to land currently occupied by non-chosen
people (i.e. non-Christians, heathens, the uncivilized, savages, pagans).

This Biblical story — and the land “discovery” by Christopher Columbus — inspired the Inter Caetera papal bull declared by Pope Alexander VI in 1493 that, “‘barbarous nations’ be overthrown or subjugated … for the spread of the Christian Empire.” This doctrine was the backbone of various royal charters issued by Christian monarchs in the “Age of Discovery” more than 500 years ago when European nations sailed around the world claiming the “divine right” to land, resources and non-Christian people for slaves.

The resulting genocide of millions of indigenous people — and the exploitation of their lands for resources and riches — is hardly confined from the current moment to a safe distance in history. As Newcomb argues, the Christian discovery doctrine was the major influence on U.S. Indian law, which not only continues to uphold federal power over Native Americans, but also is the underlying inspiration for American empire-building enterprises from Puerto Rico to the Philippines to Iraq.

Newcomb argues that Native people are free and autonomous from the grip of the “United States” because they always have been. His research provides a clear framework for untangling the oppressive
philosophies woven into federal Indian laws and U.S. imperialism and insight into how to truly address our violent history and begin the long-overdue conversation on real sovereignty and reparations.

The progressive left is often guilty of neglecting Native Americans in its rhetoric and campaigns for social and environmental justice. Could it be that to truly acknowledge and support Native struggles would require one to challenge a deeply rooted “American” pride? The hard-to-accept truth is that our “reality” is based on a long-lasting fiction constructed by greedy and oppressive Christian conquerors and European imperialists that, through federal law and economic policies, continue to wreck suffering upon those who have always been here.

For more information, read Jessica Lee’s interview with Steven T. Newcomb as they discuss Pope Benedict XVI’s recent visit to the United States and the United Nations Seventh Session of the Permanent Forum on Indigenous Issues April 21 to May 2.