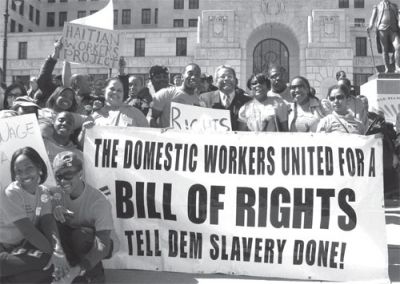 Photo by Jessica Lee: More than 200 New York City residents rallied at the state capitol in Albany April 15 in support of legislation that would set labor standards for the estimated 200,000 nannies, caretakers and housekeepers in New York state.

It was at a Westchester County preschool more than six years ago that Joycelyn Gill-Campbell discovered there were other women just like her. An immigrant from Barbados, Gill-Campell had found work as a nanny, watching two young boys of a well-to-do lawyer couple. “I found out about Domestic Workers United (DWU) through a friend who was also a nanny,” Gill-Campbell said. “The two little boys [we watched] went to the same preschool.”

Now a full-time DWU organizer, Gill-Campbell helped lead more than 200 New York City domestic workers, students, labor organizers, church members and activists to Albany April 15 to lobby key state politicians to act on the proposed Domestic Workers Bill of Rights, a bill that would create labor standards, clarity and stability in one of the few industries not covered by several major federal labor laws. Currently, the bill is awaiting consideration in both the State Senate’s (S5235) and Assembly’s (A628B) labor committees.

“Our fight for a bill of rights challenges centuries of slavery in the U.S., institutionalized marginalization, abuse and exploitation of women’s labor in the so-called ‘private sphere,’” said Linda Abad, a leading organizer with DAMAYAN Migrant Workers Association, an organization within the DWU coalition.

It is estimated that more than 200,000 domestic workers are employed in New York state. Domestic workers say they are the “invisible backbone” of New York City’s economy, that without their work as nannies, caretakers and housekeepers, thousands of accountants, doctors, architects, bankers and those in the entertainment industry would be unable to work.

“We need our legislators to know that the passage of this bill affects all of us, not just domestic workers,” Gill-Campbell said. “We want respect and recognition for the work that makes all other work possible.”

A HISTORY OF NEGLECT

While the last century saw important gains for labor rights, domestic workers have been left out of federal labor legislation, including the National Labor Relations Act, the Fair Labor Standards Act, the Occupational Safety and Health Act and various civil rights laws. “Domestic workers lack protection under the law and we have been actively ignored in labor laws since the days of slavery,” said Beatrice, a New York City nanny who preferred to not provide her last name. “Our situation is a critical one since no law defines our rights as workers.”

DWU points to the historic legacy of domestic work in the United States, in which a growing capitalist economy has relied greatly on household help and nannies. From the 1620s to the 1860s, African slaves were forced to work in the homes of their white owners. When slavery was abolished, domestic work largely became “black women’s work” until waves of female immigrants flooded into the United States looking for employment. According to a 2006 survey by DWU, 95 percent of domestic workers in New York state are people of color, 93 percent are women and 99 percent are foreign-born. However, 77 percent of their employers are white.

The Domestic Workers’ Bill of Rights would address unfair working conditions and provide for overtime pay; annual cost-of-living wage adjustments; one day of rest per week; paid time off for sick days, vacation and holidays; severance pay; access to healthcare, and advance notice of termination.

Yvon, a domestic worker in Queens who cares for 19-month-old twins and who did not feel comfortable giving her last name, explained how the bill of rights would immediately help her. “I would have more money in my pocket, more time with my family, get paid vacations, paid sick days and overtime pay,” she said. Yvon immigrated to the United States from Jamaica in 2001.

“Many transit workers are one generation away from the conditions of domestic workers,” said TWU Local 100 President Roger Toussaint at a rally held outside the state capitol building. “Virtually all of our parents spent time cleaning bed pans and taking care of people who couldn’t care for them selves. Toussaint said that his mother was a domestic worker after emigrating from Trinidad to the United States. “We will do special outreach from our union to legislators in Albany to tell them that the talking needs to stop and action nedds to start to pass the Domestic Workers’ Bill of Rights,” he said.

Efforts to unionize the domestic worker industry face many challenges, including reaching out to women who work in isolation with different employers, crossing language barriers and overcoming fears of losing legal immigration status and being deportated. DWU organizers often meet face to face with other domestic workers in the playgrounds and on neighborhood streets.

Because most domestic workers toil in isolation for different employers, Senator Diane J. Savino, a Democrat of Brooklyn and Staten Island, expressed concern during an April 15 meeting with DWU about how the Bill of Rights would be enforced.

Alexis Silver, a New York University law student who aids DWU through the university’s Immigrants’ Rights Clinic, explained to Savino that the labor standards outlined in the bill of rights would be enforced by the New York Department of Labor, but that the legislation also had a provision that would allow domestic workers to take legal action to enforce their own rights.

Sandy Calixte, an organizer with the Haitian Workers Project, explained to Savino that she has worked with domestic workers who have been exploited and abused, have had their contracts violated or have had their employers withhold their green card if they threatened to leave — essentially taking them hostage. “The bill of rights would give them some leverage to bargain with,” she said.

“We are committed to protecting the rights of all workers in New York State,” said Terri Gerstein, the deputy commissioner for wage and immigrant services in the New York State Department of Labor, the office charged with enforcing labor laws. Gerstein stressed that even without the bill of rights, domestic workers are still covered by minimum wage laws, maximum workweek hours and overtime pay for those workers who live outside the home of their employer.

Betsy McGee, a member of Employers for Justice organized by Jews for Racial and Economic Justice, said that as a former employer, she supports the Bill of Rights. “Years ago, my husband and I were fortunate enough to employee a conscientious, loving woman to help take care of our two children,” McGee said at the rally. “My guess is that one time or another, the majority of residents of New York City benefit from [domestic worker] services. We are proud to be here today to support the fundamental rights of domestic workers.”

THE LOCAL FACE OF A GLOBAL PROBLEM

While the domestic workers and their supporters rallied in Albany, it was clear from looking across the faces in the crowd that the roots of the problem extend beyond the shores of New York. “The Filipino domestic workers, like our sisters from the Caribbean, South America and other poor third world countries, are driven to leave our homelands because of extreme poverty and unemployment,” said DAMAYAN’s Linda Abad. “We all know that the economic and social crisis in our home countries are mainly caused by the plunder of multinational corporations, led by the U.S., in depleting our natural, labor and capital resources. It is called globalization.

“As a result of the severe and global crisis, we immigrants, mostly women, are forced to leave to find livelihood abroad,” Abad said. She explained in an email that she was forced to leave the Philippines more than 13 years ago in order to support her two children in college. (According to the DWU report, 33 percent of domestic workers immigrated to the United States because they were unable to support their families in their home country.) Since then, she has been a babysitter, housekeeper and a caretaker for the elderly. Most of the time, she lived in the home of her employer, working an average of 14 hours per day without overtime pay 90 percent of the time.

“We all came here for the American dream but all we got is the nightmare,” Abad said. “Our vulnerability and marginalization are systemic and institutionalized. In our view class, race, gender and globalization are all factors in domestic workers’ oppression and exploitation. … This fight is about us — workers, women and immigrants — finally acquiring collective awareness and getting organized to fight the various systems that oppress and exploit us.” 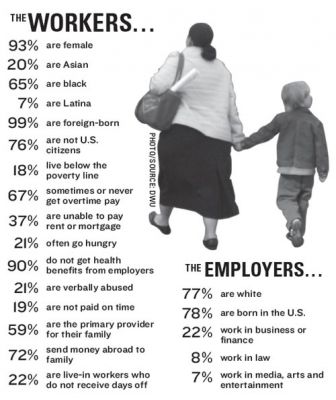