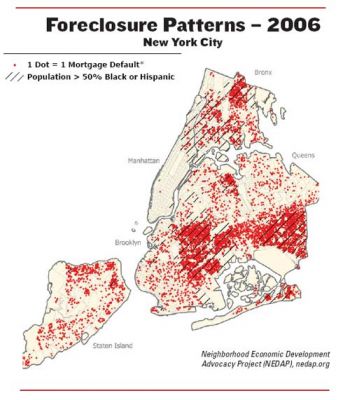 In 2002 the New York City Council passed a tough law that would have cracked down on aggressive predatory lending — and possibly helped prevent the foreclosure storm now sweeping the city’s outer boroughs. Along with laws passed in Georgia, North Carolina, New Jersey and other states in 2002 and 2003, the New York City bill, Int. No. 67-2002, was part of a raft of legislative attempts to regulate the booming subprime mortgage market.

Many of these attempts at re-regulation were watered down and often blocked by the same Wall Street firms now going to the government for mortgage-related bailouts.

In New York City the banks had an aggressive ally, Mayor Michael Bloomberg. The City Council bill, introduced by James
Sanders Jr. (D-Queens) in the spring of 2002, would have prohibited New York City from doing business with institutions that engaged, directly or indirectly, in predatory mortgage practices. After it passed in September 2002, however, Bloomberg quickly wielded his veto pen. The Council followed up by overriding the veto.

But the Mayor wasn’t done. In February 2003 Bloomberg filed suit to block the legislation, and in January 2004 it was thrown out by a state judge, having never gone into effect. The 2002 bill languished for almost two years and marked the last serious attempt by the city to crack down on predatory lending practices.

City officials did not respond to repeated requests for comments on the possibility of new anti-predatory lending legislation in the coming year.

WHAT OTHER CITIES ARE DOING

While Mayor Bloomberg’s only initiative to address the subprime mortgage crisis — the creation of a “Center for New York City Neighborhoods”— focuses entirely on legal and credit counseling for people in foreclosure, other municipalities are aggressively trying to bring some measure of justice to their fleeced citizenry.

Baltimore, Md: The city filed a lawsuit against Wells Fargo on Jan. 9, alleging the lender disproportionately targeted African Americans and the working poor with highrate, predatory home loans. Since 2000 there have been more than 33,000 foreclosures in Baltimore. Although the lawsuit declines to specify punitive damages, City Solicitor George Nilson told the Associated Press that foreclosures have cost Baltimore tens of millions of dollars in lost tax revenue.

Cleveland, Ohio: Five days after Baltimore filed suit, Cleveland Mayor Frank G. Jackson sued 21 of the nation’s largest banks and financial institutions under the city’s “Public Nuisance” law. Unlike Baltimore’s litigation, the Cleveland suit goes
not after the mortgage lenders but the Wall Street firms that bundled and sold the loans as securities. The city is arguing the fallout from banks’ predatory loans created “nuisances” across broad swaths of Cleveland because their loans led to widespread abandonment of homes. According to the city law director, Cleveland is seeking hundreds of millions of dollars in damages.

Dorchester, Mass: Residents and organizers with City Life/Vida Urbana rallied in Dorchester to stop the eviction of the Myers family from their foreclosed home. Confronted with the large protest, U.S. Bank and Premier Asset Services backed off their plan to force an eviction.

FROM NEW DEAL TO RAW DEAL

For decades, federal regulation and actions by private banks and mortgage lenders have contributed to “redlining” — the practice of denying loans to residents in minority neighborhoods. Starting in the 1960s, reforms led to increased home ownership among African-Americans and other minority groups, but “the business assault on regulation over the past quarter-century” in the words of consumer advocate Ralph Nader, “has now caused a burgeoning sub-prime mortgage collapse that is producing hundreds of thousands of home foreclosures.”

1933
Following the 1929 stock market crash Congress passes the Glass-Steagall Act, requiring banks to specialize either in
commercial or investment banking. The aim was to curb banks from selling the public high-risk investments, which is seen as a major cause of the crash.

1968
The Federal Government passes the Fair Housing Act (FHA), which prohibits discrimination in the sale, rental or financing
of housing on the basis of race, religion, gender, familial status, disability or ethnic origin.

1977
Passage of the Community Reinvestment Act (CRA), which mandates that banking institutions be evaluated to determine
if they have met the credit needs of their entire community. These records are usually taken into account when the government considers an application for mergers and acquisitions.

1987
Citicorp, J.P. Morgan and other investment banks lobby the Federal Reserve Board to loosen Glass-Steagall regulations.
Then-Chairman Paul Volcker expresses fears the revisions will lead banks to market bad loans to the public, but the Board overrides him in a 3-2 vote, allowing banks to handle multiple underwriting businesses, including commercial paper, municipal revenue bonds and mortgage-backed securities.

1995
While changes to the CRA are credited with helping to increase the amount of loans to small businesses and low- and
moderate-income borrowers, Clinton-era revisions to the law also allow investment banks to create securities from CRA loans containing subprime mortgages. Securitization of CRA loans begins in 1997.

1999
After years of lobbying, and more than $250 million spent by various financial sectors in the previous two years, Bill Clinton signs into law the Financial Services Modernization Act, which repeals Glass-Steagall. One immediate effect is to allow a wave of commercial and investment bank consolidation, including Citigroup and Travelers insurance. Clinton‘s Treasury Secretary Robert Rubin, who advocated strongly for Glass-Seagall’s elimination, resigns days after the repeal and joins Citigroup for $15 million a year.

2003
Following a series of state laws passed to crack down on abusive lending practices in the mortgage market, the Office of the
Comptroller of the Currency exempts national banks from state regulations that protect consumers. The already overheated subprime market explodes, with most of the dubious mortgage loans occurring between 2004 and 2006