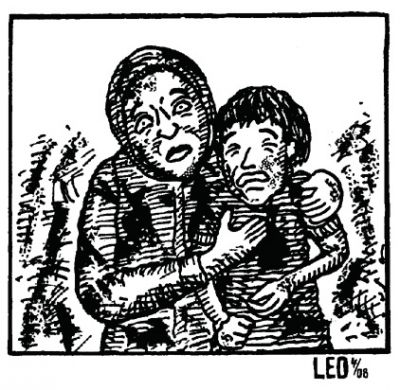 The War of 33:
Letters from Beirut
Directed By Rick Rowley
Big Noise Films, 2007

Lebanese bloggers offered unusual immediacy to readers outside the Middle East during Israel’s 33 days of bombings in the summer of 2006 — a conflict aimed at Hizbullah that killed more than a thousand civilians. One of those online voices — As-Safir newspaper editor Hanady Salman, whose war letters appeared on the blog “Beirut Journal” (beirutjournal.blogspot. com) — is the narrator of a new independent documentary on the conflict.

The film accomplishes in 35 jarring minutes what hours of news coverage nearly two years ago did not: to convey the weight of civilian suffering in this war through the personal narrative of Salman herself, a mother trying to survive bombardment.

Salman’s reading of letters she wrote during the war narrates the film, and our understanding of the war grows with her experience. “This morning I stayed home til noon,” she writes. “I played with Kinda, my poor little baby. The first time she heard the bombing she rushed to my arms, asking if this was fireworks. I said no, this is Boom Boom, Ha Ha. And I started laughing. So now every time she hears the bombing she starts singing, Boom Boom, and she laughs.” Home video footage of Kinda playing in their apartment underscores the disjunction of civilian life under bombardment.

There are shots of lit-up night skies, of flattened neighborhoods, and gruesome photos and videos that were not shown in much Western media. Dead children, bodies gray with concrete dust, are pulled from the rubble of an apartment building in Qana, a village in southern Lebanon twice devastated in civilian attacks by Israel, 10 years apart.

In a letter dated July 30, 2006, when 55 civilians were initially presumed dead in an air strike on a shelter, Salman writes with subdued outrage: “Only to let you know that a number of these civilians are handicapped — they were hit in the last Qana massacres in 1996. Only to let you know that CNN and BBC are hosting IDF [Israel Defense Forces] spokespeople who tell the world that these civilians were warned to leave, but they just didn’t.”

Salman confronts the reality of trying to shield her baby daughter from the horrors of war on display in the newspapers. Then her daughter sees a photo of an injured sevenyear- old girl and insists on wanting to visit the “sick girl” in hospital. Later, we see news reports of the United States’ rush shipment of satellite and laser-guided bombs to Israel, and of George Bush’s explanation against an immediate ceasefire — that “sometimes the world likes to take the easy way out.”

“Baby Waad was in her mother’s arms,” Salman writes. “She stayed there when the building fell on them. It was the rescuer who separated them. Waad died in one piece. Too small to be cut in two: she is, was, 10 days old. From the mother, only one arm remained.”

“They killed baby Manal. Baby Mohamad, baby Ali, baby every single name in the Arabic language. Those they missed here, they killed in Palestine,” she says in a calm voiceover.

The film nears its close with shots of the coastline outside Beirut. Wreckage floats on the shore as Salman meditates over all that remains under the rubble and what might be salvaged. She has just read another letter about destruction, offering the film’s most arresting line: “People are rotting under the rubble in every single village south of the Litani River in southern Lebanon.” The film’s personal narrative raises questions of how to connect with another’s experience in wartime in order to move outside our own distanced frame of understanding.

I recognized a building in the film as one I had stood below last spring during a visit to Lebanon. A year later I go back to that aftermath, the flattened apartments becoming part of a neighborhood. That I recognized the building on screen — I recognized it in its damage — and that I saw it in person nine months after the bombs fell, might describe how much remains damaged and un-built in Lebanon.

Freddy Deknatel is a senior at Vassar College who lived in Egypt for a year studying at American University in Cairo.