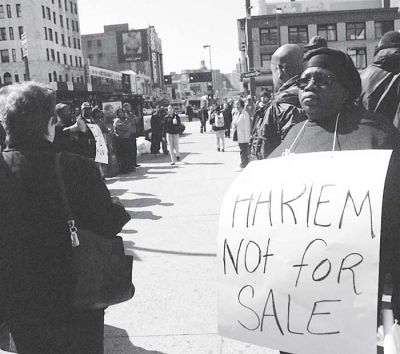 Developers waiting to build luxury skyscrapers on 125th Street will have to meet new guidelines outlined in a “compromise” rezoning plan that has drawn mixed reviews.

The rezoning plan backed by the Bloomberg administration applies to 124th to 126th streets, from Broadway to Second Avenue, and could dramatically alter the feel of Harlem’s “main street.”

City Councilwoman Inez Dickens pushed for the changes, which were approved April 15 in a 10-1 vote by a key subcommittee after community activists held months of protests.

“It is my opinion that all of the components I have worked so hard to secure will honor Harlem’s past, claim Harlem’s present, and provide for Harlem’s bright, expansive future,” Dickens said.

In addition to lowering the allowed height for buildings from 290 to 195 feet, the plan includes a $6 million loan program for an estimated 71 businesses that will be displaced by new development.

“Where are these displaced businesses going to go?” asked Sikulu Shange, who owns the Record Shack and operates in a leased storefront space across from the Apollo Theater.

“We need the presence of community-based businesses on 125th Street as the main corridor of the community if it is still to be regarded as the Harlem we know,” said Shange, who is a member of the Coalition to Save Harlem.

The compromise plan may require as much as 46 percent of nearly 4,000 new apartment units to be set aside for residents who qualify for low-income housing. Eligible families could earn no more than $30,750 per year, which is the average Harlem household income. Critics who have studied the plan say the actual percentage of low-income units could be as little
as 10 percent.

Street vendors who line the bustling thoroughfare and interact with both local residents and tourists are not mentioned in the plan.