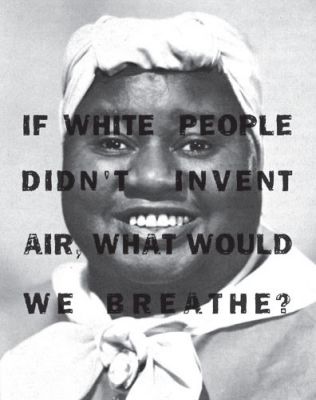 Political artist Dread Scott’s latest exhibition, “Welcome to America,” has been the source of controversy since its opening February 28 at the Museum of Contemporary African Diasporan Arts (MoCADA) in Brooklyn. The exhibit, which spans almost 20 years of Scott’s work, points to the continuing racial violence perpetrated by the United States: the effects of the “War on Terror” at home and abroad; the devastation of Hurricanes Katrina and Rita, and police brutality.

One piece in particular, “The Blue Wall of Violence,” has garnered attacks by both the mainstream media and the Patrolmen’s Benevolent Association (PBA). On the wall are six shooting targets with outstretched arms holding actual objects, such as a wallet or house keys, that the NYP D allegedly mistook for a weapon in various police shootings of black
males. Originally created in the late 1990s in response to the numerous killings of unarmed black men by the NYP D, “The Blue Wall of Violence” is, unfortunately, as relevant as ever: the exhibit began the same week as the Sean Bell murder trial.

The day after the exhibit’s opening, The Daily News wrote, “A cop-bashing art exhibit at a taxpayer- funded museum in Brooklyn portrays the city’s Finest as trigger-happy racists who have put bull’s-eyes on the backs of black New Yorkers.” The article quotes the head of the PBA, Pat Lynch, who questioned whether the Mo-CADA deserved to be funded by tax dollars. Despite the PBA’s later statement that it would not work to have the MoCADA defunded, the continued backlash against Scott’s work is still evident in the blogs of numerous police officers calling his work and the museum “racist” and declaring that he should “go back to his country of origin.” Such allegations ignore the continuing violence of police and prisons against communities of color, and falsely simplify Dread Scott’s artistic message.

“Welcome to America” is worth seeing not simply because of the controversy it has raised but because Scott has thoughtfully used art to push viewers to consider the “polarization, exploitation, and suffering” caused by the United States across the globe. Scott’s piece “Enduring Freedom” memorializes the thousands of Afghans killed in the “War on Terror” by
displaying “graves” of newspaper clippings giving details about those killed by U.S. bombs. By focusing on the details, Scott is able to bring out the humanity of those individuals who have been dehumanized in the process of war.

Scott focuses on the deaths caused at home by the U.S. government in “Never Forgive, Never Forget: They Left Us Here to Die,” which memorializes people killed in Hurricane Katrina and its aftermath. Memorial posters wheat-pasted on wood paneling — modeled after the martyr poster of Palestinians killed by Israeli forces — draw the connections between the struggles of New Orleanians and Palestinians against displacement and erasure.

In the end, much of the controversy over the exhibition has overshadowed the larger message of the exhibit: to call attention to the reality that racial violence does not occur as an isolated incident. Rather, it is part and parcel of our nation, founded on the genocide of native peoples and the enslavement of Africans. Through linking the continuing effects of Katrina on the internally displaced peoples of New Orleans and the Gulf Coast, the further criminalization of immigrants post-9/11 and the targeting of Black males by the police system, Scott aptly demonstrates how the racial horrors of the American past are still deeply with us at the beginning of the 21st century.

“Welcome to America” will be on display at MoCADA through June 1st.